Is it the end of the road for eight communal bins after neighbours’ campaign?

Neighbours are to be formally consulted about the future of the eight communal bins in their street after they submitted a petition to councillors. 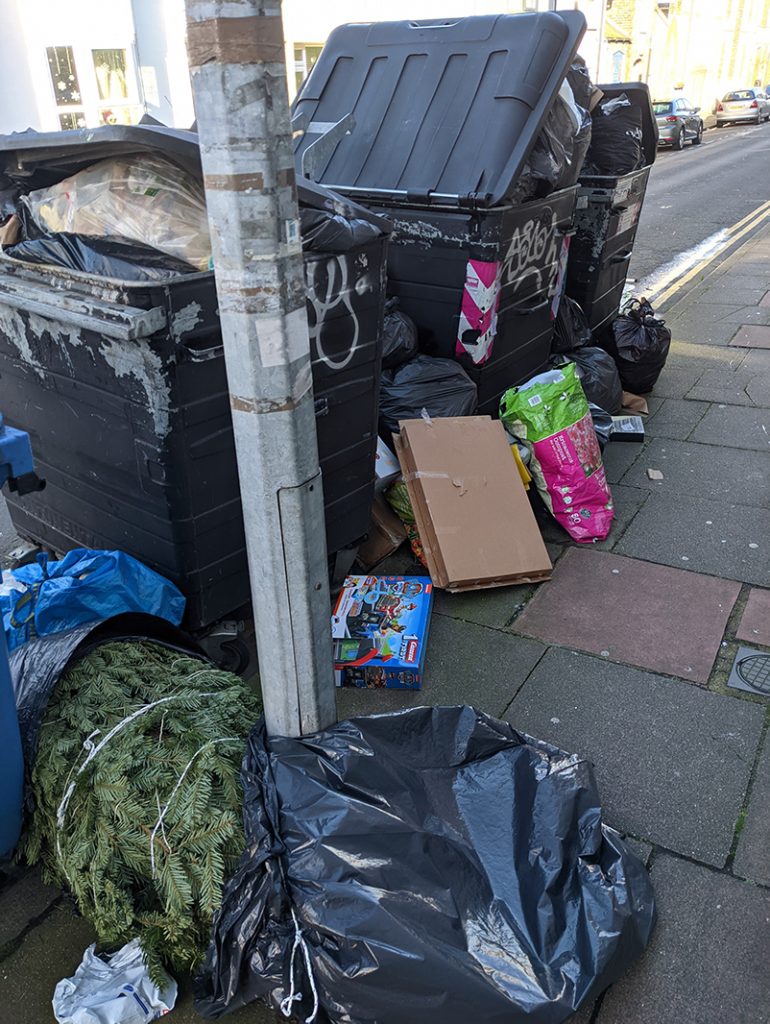 Fly-tipping last Christmas by one of the Washington Street bins

The petition was signed by people from 75 out the 96 homes in Washington Street, in the Hanover area of Brighton.

The street is the only one in the area with communal bins after a year-long trial carried out by Brighton and Hove City Council in 2012.

The result, people in Washington Street said, was that their street was being used as a “dumping ground” for the rest of Hanover.

In the rest of Hanover, there are individual bins for each house.

Mr Lewry told councillors that only a few people wanted the bins to remain compared with the vast majority who wanted them gone.

He said that communal bins were causing “untold awful problems” in the street, including late-night fly-tipping, which could be heard in the early hours even from a distance.

And a couple were even threatened with a fine for fly-tipping after rubbish was dumped outside their home by others.

Even when bins were moved to neighbouring Jackson Street, people still fly-tipped rubbish where the bins used to be.

Mr Lewry said: “We have had decomposing rats and nappies over the road. Seagulls were picking at the dirty nappies and other nasty stuff.

“We’ve had arguments with people from other neighbouring streets who, when they have more rubbish than fits into their bins, bring it to our street. If the bins are full, then they leave it on the street.”

Mr Lewry said that neighbours who were in favour of the original trial thought it would cover the whole area not just a few streets.

He also asked for the public consultation to include people who lived on the corner of neighbouring streets because they were also affected by the fly-tipping problem.

Green councillor Steve Davis, who chaired the meeting at Hove Town Hall earlier, told Mr Lewry said that councillors had approved the consultation without the need for debate.