Hundreds of parents, teachers and supporters of Carden Primary School in Hollingbury have come out to fight local authority plans to axe one of the school’s two intake classes.

They were, said parents, discriminatory, unfair and at odds with council values supporting diversity and cutting carbon emissions – and would tear the heart out of the local community.

Already, more than 1,500 people have already signed a petition to “Keep Carden Nursery and Primary School as a thriving two-form entry”. To add your name, click here.

At the meeting on Thursday, parents and teachers said that the cuts would devastate the school and disproportionally hit poorer families, pupils with special educational needs and the area’s diverse community.

Abby Kinslow, for the school’s PTA (parent teacher association), said: “This is a diverse area and that is reflected in the school’s intake.

“The pupils are 44 per cent BAME (black and minority ethnic) and there are students from the Muslim community, the traveller community and social housing.”

She said that the council’s own figures showed that the cut to the intake would leave many children in the area without a local school to attend.

This would force them to travel farther afield and lead to a massive increase in transport-fuelled carbon emissions.

She added: “Carden is bucking all the trends. It is growing. We will keep fighting for a two-form entry school where children, staff and parents thrive because one-form entry will be the start of a painful demise.

“Our good teachers will leave, our integration will fail, our community will be fractured and our budget won’t balance. Delay this decision and give us a chance to prove we aren’t just surviving, we are thriving.”

Parent Reyna Kothari, who also chairs the local Old Boat Corner community centre, which provides a food bank and support for families in the area, said that she chose Carden because it is one of the few schools in Brighton that is not predominantly ethnically white.

She said: “I don’t want my children to go to a predominantly white school.”

Another parent spent three years trying to get her son into Carden’s highly rated Speech and Language Centre.

The centre, which has 22 places, enables pupils with special educational needs to have specialist teaching and also to integrate with mainstream classes. 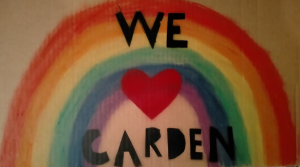 She said that families find this highly beneficial and noted that this integration was extremely unusual in the area.

Parent Kate Milner-Gulland said: “As a group you can tell we’ve found lots of holes in the local authority’s argument so we can only conclude this is a discriminatory decision.

“This community has been targeted and they do not believe the argument is fair.”

The meeting followed a busy protest march the day before (Wednesday 24 November) and a petition challenging the proposals, which has already attracted more than 1,500 signatures.

Carden Primary School was rated “good” by Ofsted in September. In its report, Ofsted praised the school’s diversity and commitment to inclusivity that makes pupils “feel well cared for and secure”.

The report said: “The school’s commitment to equality and diversity lies at the heart of all it does and underpins pupils’ learning.”

“Leaders are highly successful at engaging members from all corners of the school community in special events, such as its recent celebration of Eid.”

And it added: “Pupils are understandably proud of their school.”