Neighbours fighting plans for a 5G mast on the roof of their block of flats have started a petition aimed at thwarting telecoms bosses.

Vodafone and O2 wanted to put 12 masts and four dishes on the roof of Park Lodge, in Dyke Road, Hove, as well as seven cabinets in the communal garden.

Their infrastructure business Cornerstone submitted a planning application to Brighton and Hove City Council in the summer but, in the face of opposition, withdrew it.

Leaseholders in the block believe that a revised application is on the cards.

So they have started a petition asking the council to protect land between Dyke Road, Old Shoreham Road and The Upper Drive.

They want the council to bring in a policy – known as an Article 4 Direction = that would prevent telecoms masts being granted planning permission under a process known as “prior approval”.

The petition said: “Dyke Road Park is recognised on the Brighton and Hove List of Heritage Assets. It is rich in flora and fauna, some of which has protected status. This includes vintage elm trees, badgers and bats.

“It is used by the wider population and students attending the five schools in the vicinity. It is part of the urban ‘green lung’ connecting coast to downland as part of the UNESCO sponsored Living Coast.

“The proposed area has concentrated use by young people for substantial amounts of time for education and leisure purposes.

“A precautionary approach to the introduction of 5G technology in the identified area is prudent and called for.”

Park Lodge resident Valerie Bundy, who has campaigned against mobile phone masts on top of her home for more than 20 years, led the most recent campaign against the proposed masts.

She marked out a space in the block’s communal garden to show how much would be lost if Cornerstone installed its masts and cabinets there.

Miss Bundy said: “A recent invalidated attempt to place a large network of 5G masts and dishes on the roof and ‘theft’ of a large portion of a small community garden that is home to wildlife including protected species highlighted how vulnerable the area is to such a development.

“The park is recognised by Brighton and Hove as a ‘heritage asset of local value’, is used and loved by a wide section of the community.

“We want to protect the special character of this area and keep it for the use of current and future generations to enjoy without this oppressive development undermining their enjoyment of the area.” 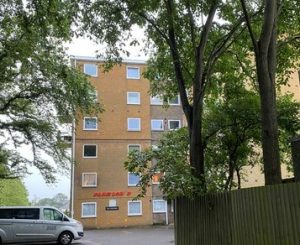 Conservative councillor Samer Bagaeen said that he and his fellow Hove Park ward councillor Vanessa Brown supported the petition and hoped to present it to a meeting of the full council in February.

He said: “It comes on the back of a small win to stall the application for an array on top of Park Lodge against the wishes of both leaseholders and freeholders.

“We’ve just turned round an application for a mast in Shirley Drive, at the bottom of Tongdean Road, so we will always fight applications that do not recognise or consult with our residents.”