Desmond Tutu was a bright beacon of protest, dignity and Christian compassion. His light might no longer be with us but his vision for a Rainbow Nation lives on.

During the worst years of apartheid, he gave a voice to the voiceless, risking persecution and imprisonment, using his pulpit to denounce the crimes of apartheid and setting out a vision for a better South Africa. The risk to him personally cannot be overstated, and imprisonment, even assassination, were a constant reality.

His courage knew no bounds. When confronted by a crowd intent on killing a suspected informer through the barbaric process of “necklacing” (car tyres were put around the person, petrol was poured on them and they were burnt to death), he told the crowd that they would have to kill him first before they killed the terrified woman. He saved her life.

He fearlessly entered some of the citadels of Afrikanerdom, on one occasion speaking at one of the most prominent Afrikaans universities, the first black person ever to have done so. The students did not know how to cope with his intellect and humour as he demolished the fundamentals of apartheid and ridiculed its practical implementation.

For example, he said that there was a popular myth that black people wanted to drive white people into the sea. (I remember as a six-year-old being fed such a diet of hatred at my school). Tutu reflected: “How could we drive you into the sea? You don’t even allow us onto the beach!”

He also pointed to the way black people were treated as second, if not third-class citizens. The reality was that, under apartheid, black people could not get citizenship at all and were denied the vote until 1994. He told the students that there was a very dangerous freeway outside Soweto where there had been many fatalities as people were hit by fast moving cars as they crossed from the railway station into Soweto itself. A call for a bridge to be built fell on deaf ears. The most that the white authorities would do was to put up a sign warning motorists: “Beware! Blacks cross here.” He said that someone had amended the sign so it read: “Beware! Blacks VERY cross here.”

Tutu lived for much of his life in Soweto, on Vilakazi Street, where Mandela also had his home. It is probably the only street in the world that was home to two Nobel Peace Prize winners!

Mandela described him as “… sometimes strident, often tender, never afraid and seldom without humour, Desmond Tutu’s voice will always be the voice of the voiceless”.

He was always prepared to talk to the “enemy”, although they often ignored him. “If you want peace, you don’t talk to your friends. You talk to your enemies,” he said.

After the end of apartheid, within a few weeks of Nelson Mandela being elected president, he had a clash with Madiba. One of the first decisions of the new ANC government was to vote themselves a pay increase. Archbishop Tutu commented: “The new government has stopped the gravy train only long enough to get on board.” To his credit, Mandela reversed the decision after a tense stand-off with his long-time friend.

Mandela did get his own back after Tutu questioned Mandela’s wardrobe, saying that the famous Mandela shirts were not appropriate for someone holding the highest office in the land. Mandela retorted: “I will not take lessons on fashion from a man who wears dresses in public.”

Truth and reconciliation after the years of apartheid became a cornerstone of post-apartheid South Africa, sadly swept away in the post-Mandela years by corruption, nepotism and incompetence. There was just one person who had the stature, respect and ability to lead the Truth and Reconciliation Commission (TRC). Tutu poured his heart and very being into the process, openly sobbing on occasions, losing his temper occasionally, and bringing comfort to the bereaved and the abused, through words and hugs. The TRC was not a perfect process, but I do not know of any other process anywhere, ever, that helped to heal some of the most profound wounds. 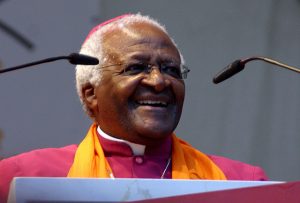 He was outspoken about gay rights, saying: “If God, as they say, is homophobic, I wouldn’t worship that God.” He equated homophobia with racism, saying that it was a crime against humanity and “every bit as unjust” as apartheid. His own daughter, Mpho, married a woman, and he gave a blessing at the marriage.

In more recent years Tutu denounced violence against women, and spoke about the responsibility of men to stand up against sexist violence: “It is by standing up for the rights of girls and women that we truly measure up as men.”

I had the great honour of meeting Desmond Tutu on one occasion. He was warm and he spoke highly of my uncle, himself a prominent anti-apartheid Bishop in the 1970s. My parents, at the time both members of the Synod in Cape Town, voted for Tutu to become Archbishop of Cape Town. He was unsuccessful on that first occasion but was elected a few years later, in 1986. (In South Africa bishops are elected unlike in England where they are appointed by the Crown on the advice of the Prime Minister of the day.)

His episcopal seat, St George’s Cathedral in Cape Town, sits adjacent to the parliamentary estate. The juxtaposition of the then white-only Parliament and of the Cathedral with its new, dynamic Archbishop provided hope and inspiration to millions of South Africans. Tutu led numerous marches and campaigns for the formal end of apartheid from the front steps of the Cathedral. My own brother and sister were arrested on the steps of the Cathedral, my sister twice, during anti-apartheid student protests in the early 1970s.

Desmond Tutu spoke about South Africa being a Rainbow Nation. Corruption, the HIV/AIDS epidemic and violence against women and children became important causes for him after the first free and democratic elections. “I call on men and boys everywhere to take a stand against the mistreatment of girls and women. It is by standing up for the rights of girls and women that we truly measure up as men,” he said. His Rainbow Nation is still an aspiration, and while we have democracy in South Africa, it was a sadness for him that such injustices and poverty remain.

With him for more than 60 years was his wife, Leah, with whom he had four children. The daughter of a domestic worker, Mrs Tutu has always been concerned about the social rights and conditions of domestic workers, being one of the largest professional groups in South Africa. Using her experience as a teacher, she became a true advocate of equal opportunities and social rights for the domestic workforce and one of the founders of the South African Domestic Workers Association.

This morning (Sunday 26 December 2021) Cyril Ramaphosa, the President of South Africa, said that Tutu’s death marked “another chapter of bereavement in our nation’s farewell to a generation of outstanding South Africans”. I believe that Desmond Tutu was an outstanding member of that outstanding generation, and I mourn his death today while celebrating his life.

South Africa and the world is a poorer place, a sadder place and a quieter place now that Desmond Tutu is no longer with us.