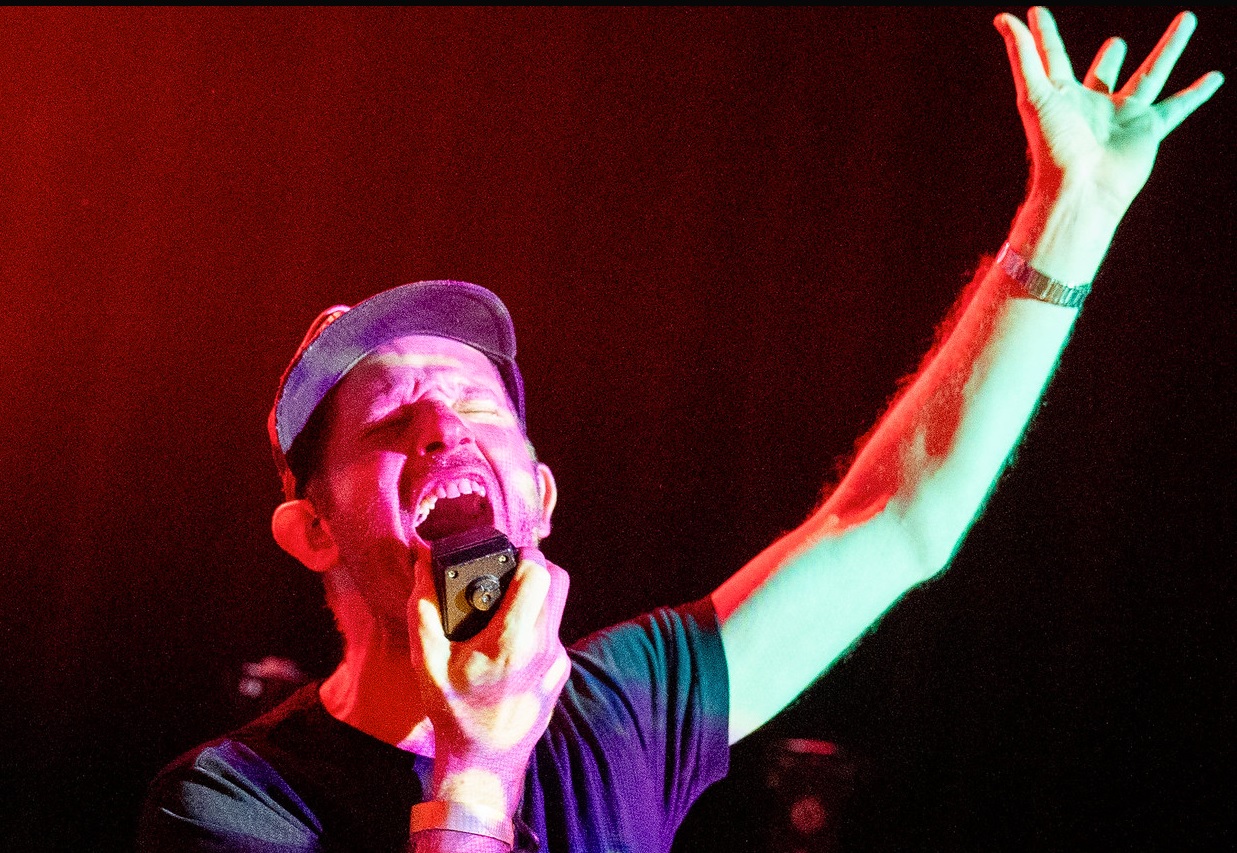 Brighton’s very own electronic and drums duo AK/DK have announced that they will be performing an uplifting set at the Concorde 2 in Brighton on Sunday 29th May 2022. They will be playing live at ‘The Official Jordan Mooney Memorial Charity Concert’ in order to celebrate the life of the famous punk rock and fashion icon that sadly passed away last month. When Jordan saw AK/DK live last October at CHALK she was “highly elated and most certainly wanted more of the AK/DK elixir”. 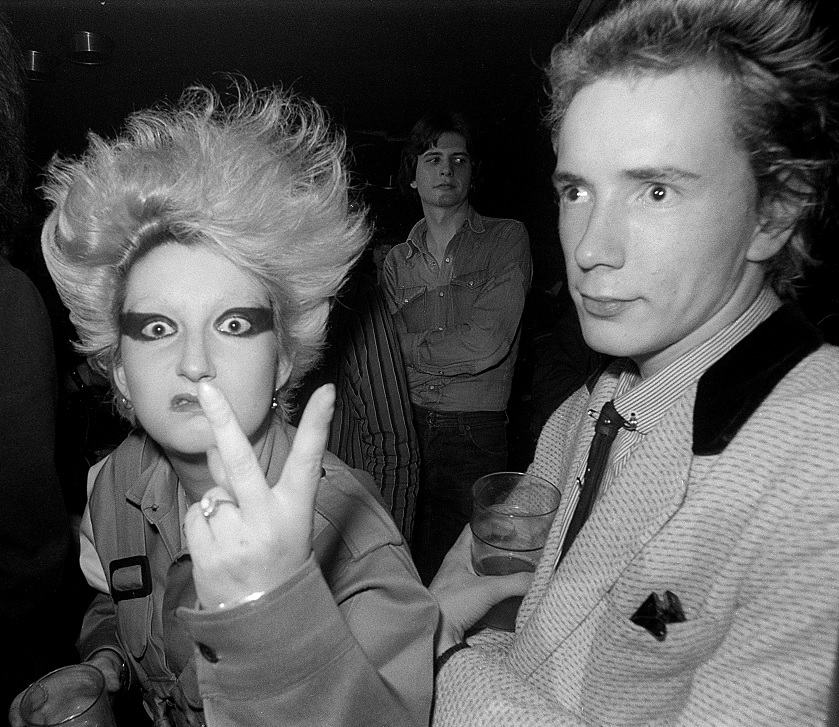 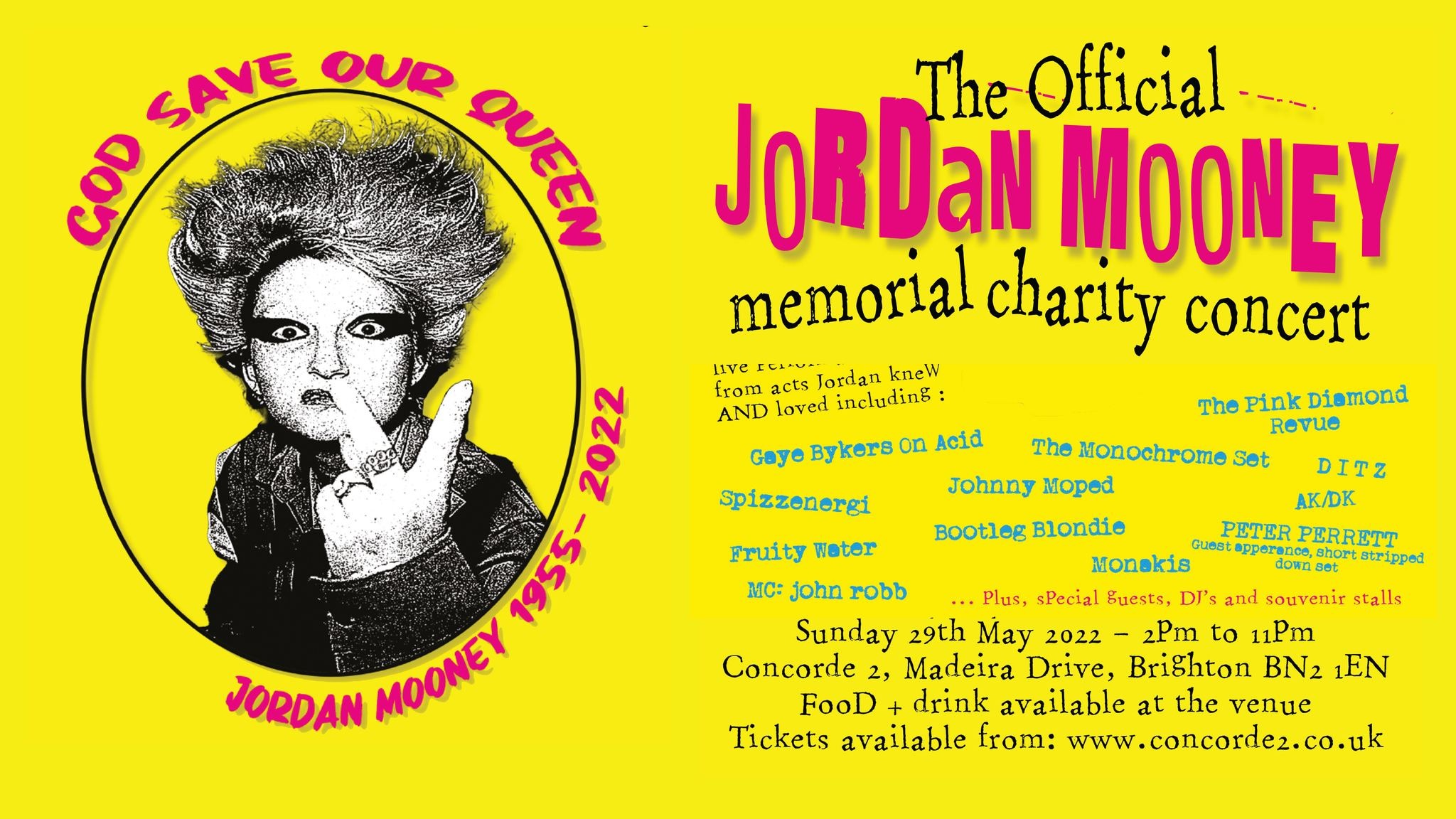 Here is the account of the AK/DK concert performance that Jordan enjoyed so much…….

We have been looking forward to this hometown gig by Brighton’s double synth and drum duo AK/DK for quite some time now, as I again wished to be immersed in a kaleidoscopic blend of high energy synths and structural drums! I am already the proud owner of two of their albums on vinyl (2017’s ‘Patterns​/​Harmonics’ and a Dinked psychedelic splatter version of 2020’s ‘Shared Particles’) and was rather hoping to add their debut 2014 platter ‘Synths + Drums + Noise + Space’ to my collection by visiting their merch stand this evening at CHALK in Pool Valley, Brighton. 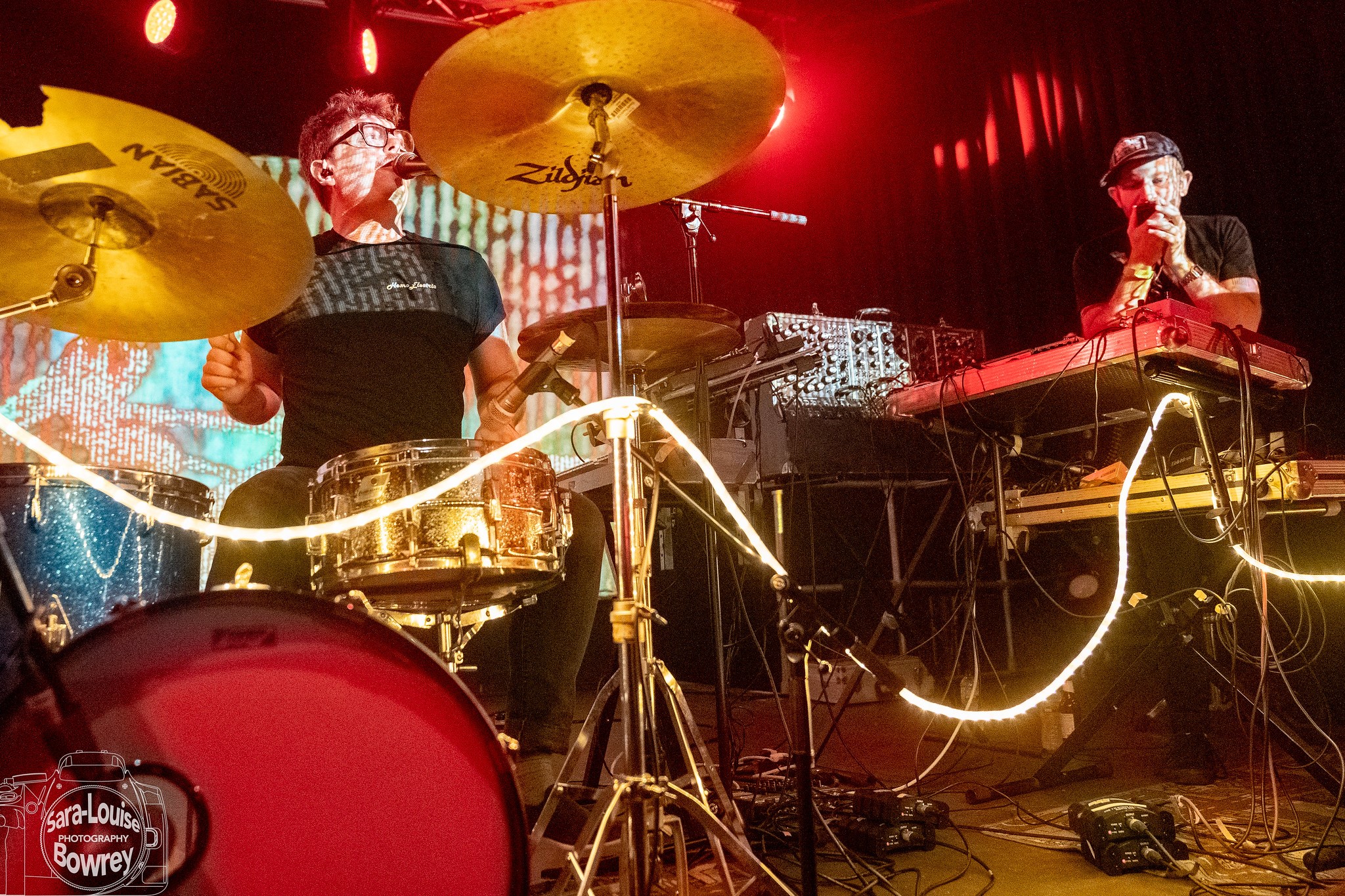 AK/DK consists of Ed and Gee and they are purveyors of top notch lo-fi electro-punk. During their uplifting live sets – which I have been witness to several times over the past few years – they both play synths and both play the drums – quite often at the same time! Imagine Burundi drums goes electronic and there you have it – fast, exciting, body jerking rhythms to lose yourself in. They multi-task their way through a joyful barrage of distorted drums and rhythms interwoven with simmering electronics – perfect! 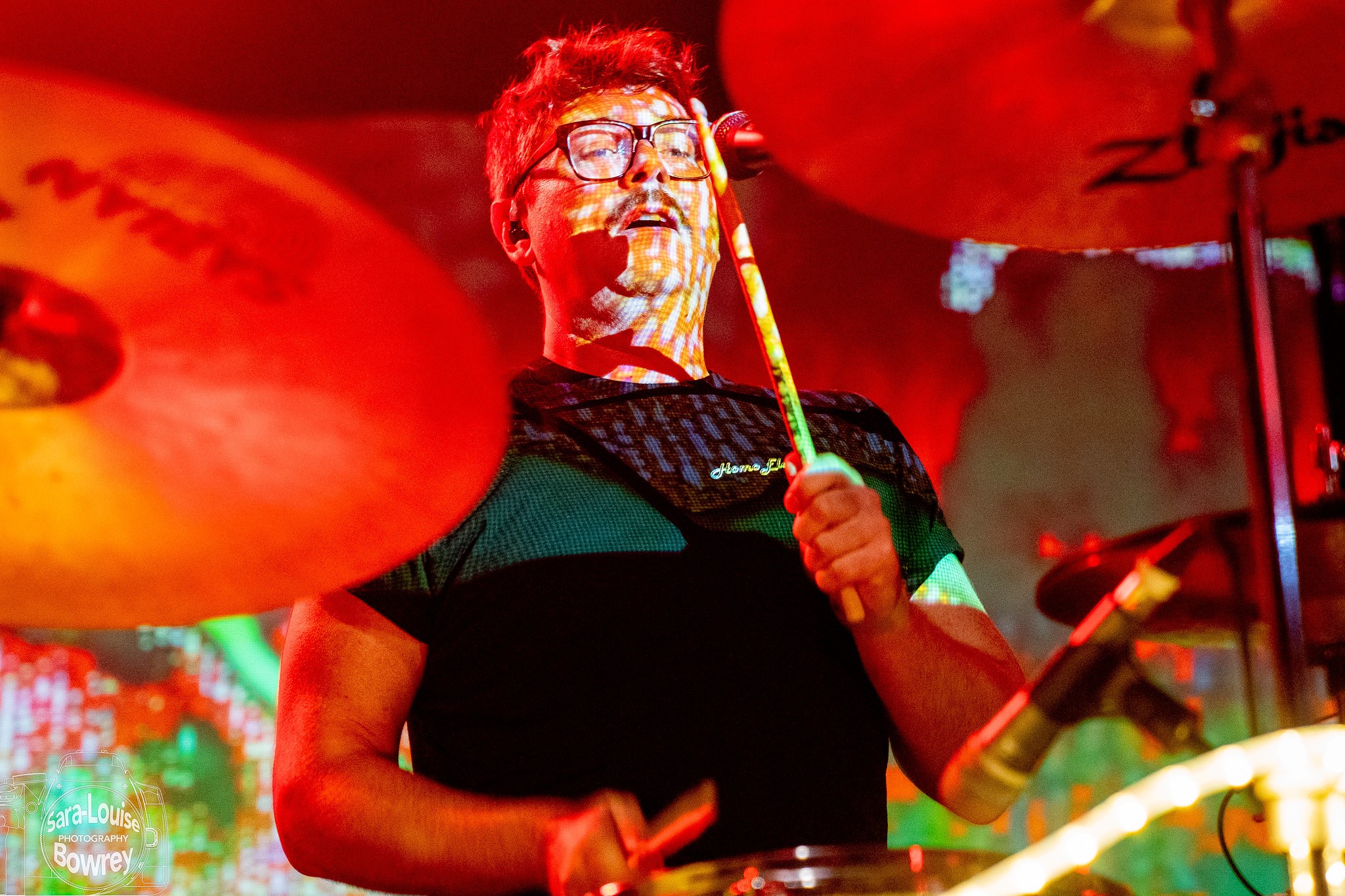 AK/DK stream of layers of fizzing arpeggios and crushing motorik drums has earned them places on stages and at festivals all around the UK and Europe. The AK/DK sound is rather unique, but if push comes to shove, then you can expect elements similar to the likes of Underworld, Orbital, Moon Duo, Boredoms, Suicide and Sigue Sigue Sputnik. 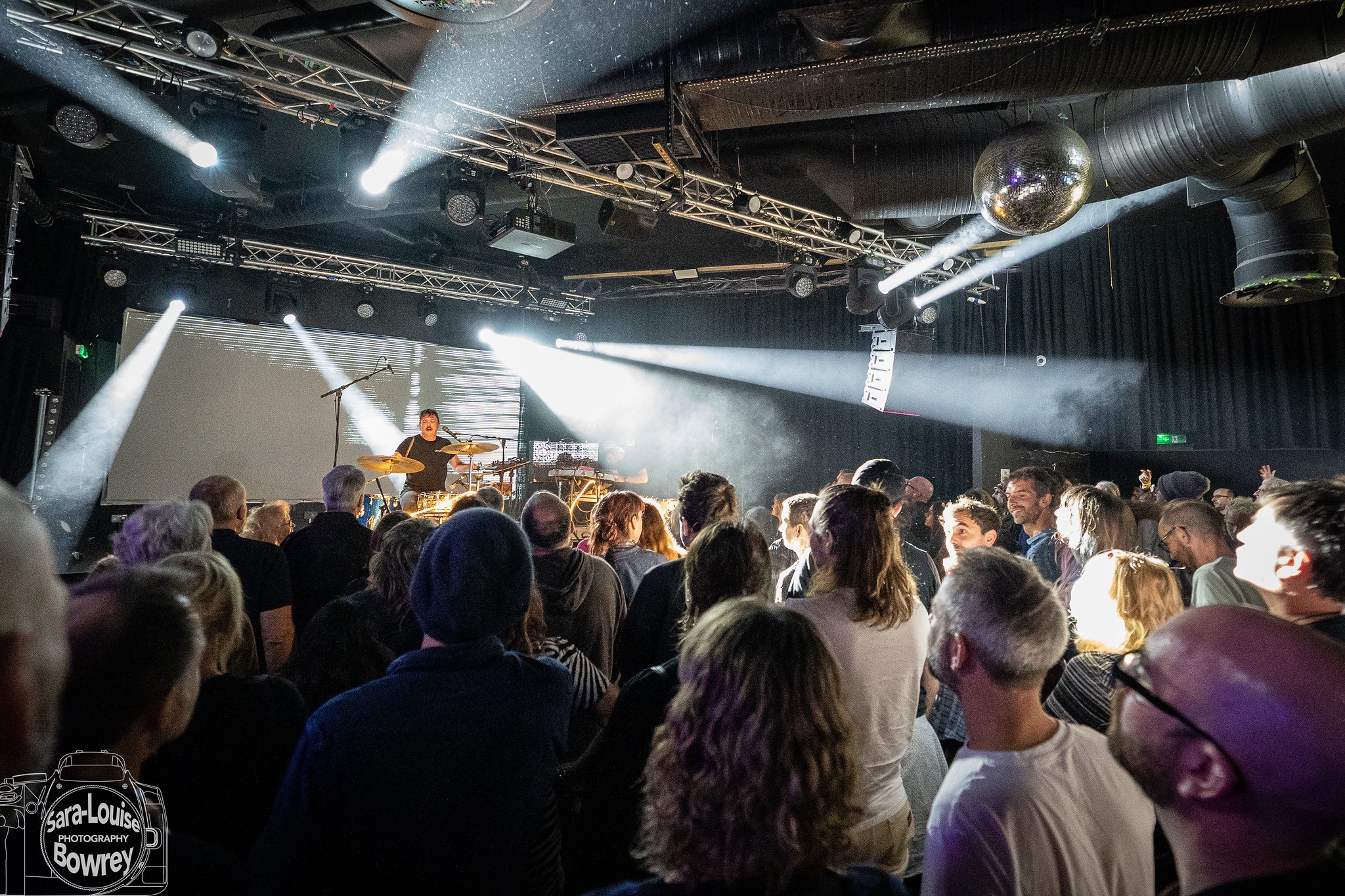 Some of the audience at CHALK, Brighton 15.10.21 (pic Sara-Louise Bowrey) (click pic to enlarge!)

The duo took to the expansive CHALK stage this evening at 8:53pm and performed eight choice cuts culled from five of their different releases over the past decade, half of which can be found on their latest album ‘Shared Particles’. 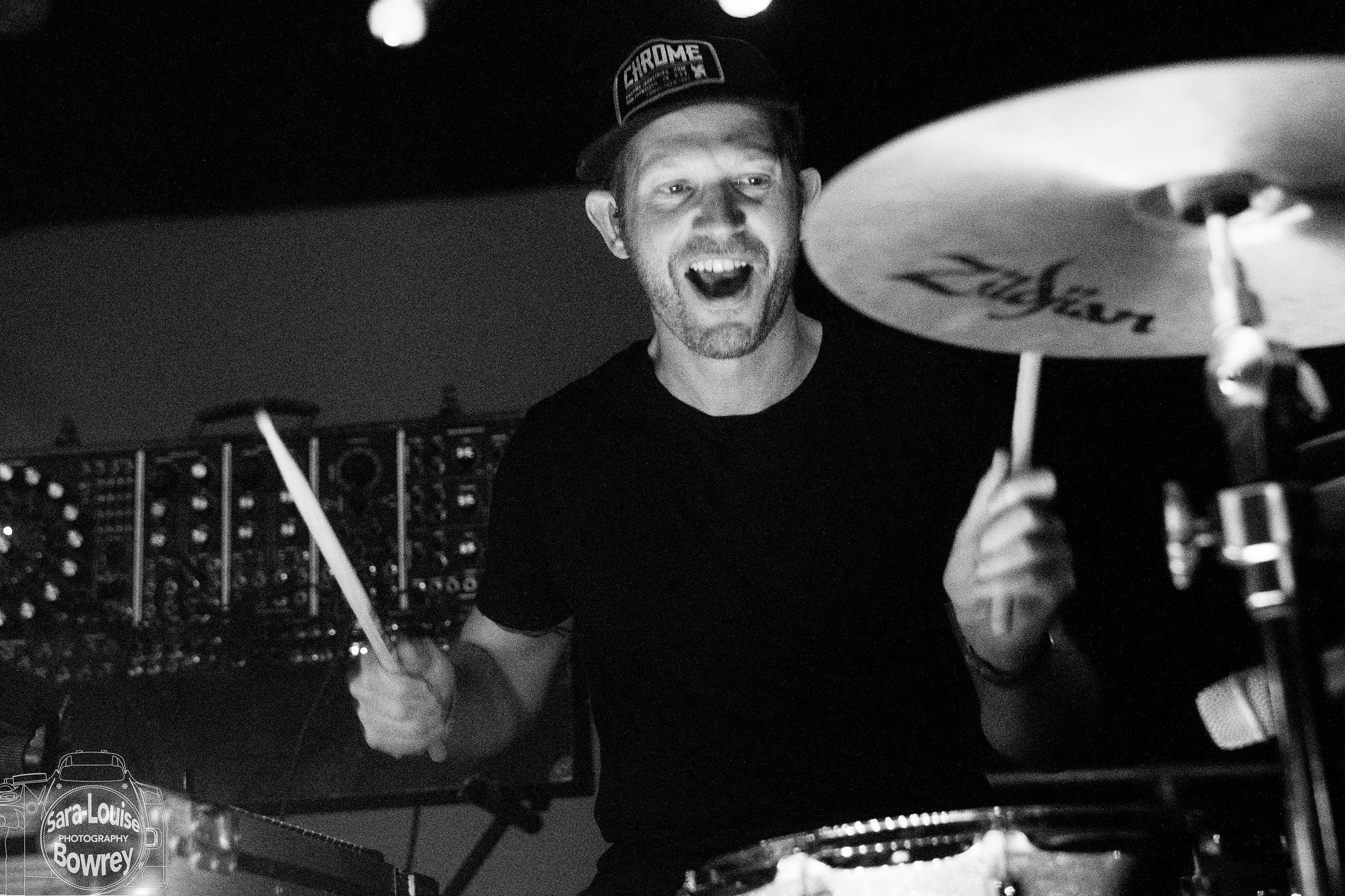 It was obvious from the very first moments of their set that the backing audio visuals were the work of Lewes based Innerstings. Every time I watch a performance when Innerstrings are assisting with the vision aspect, I find it enhances the sound part too. As Mr Bowie once said “Waiting for the gift of sound and vision”. And a gift we all greatly received! 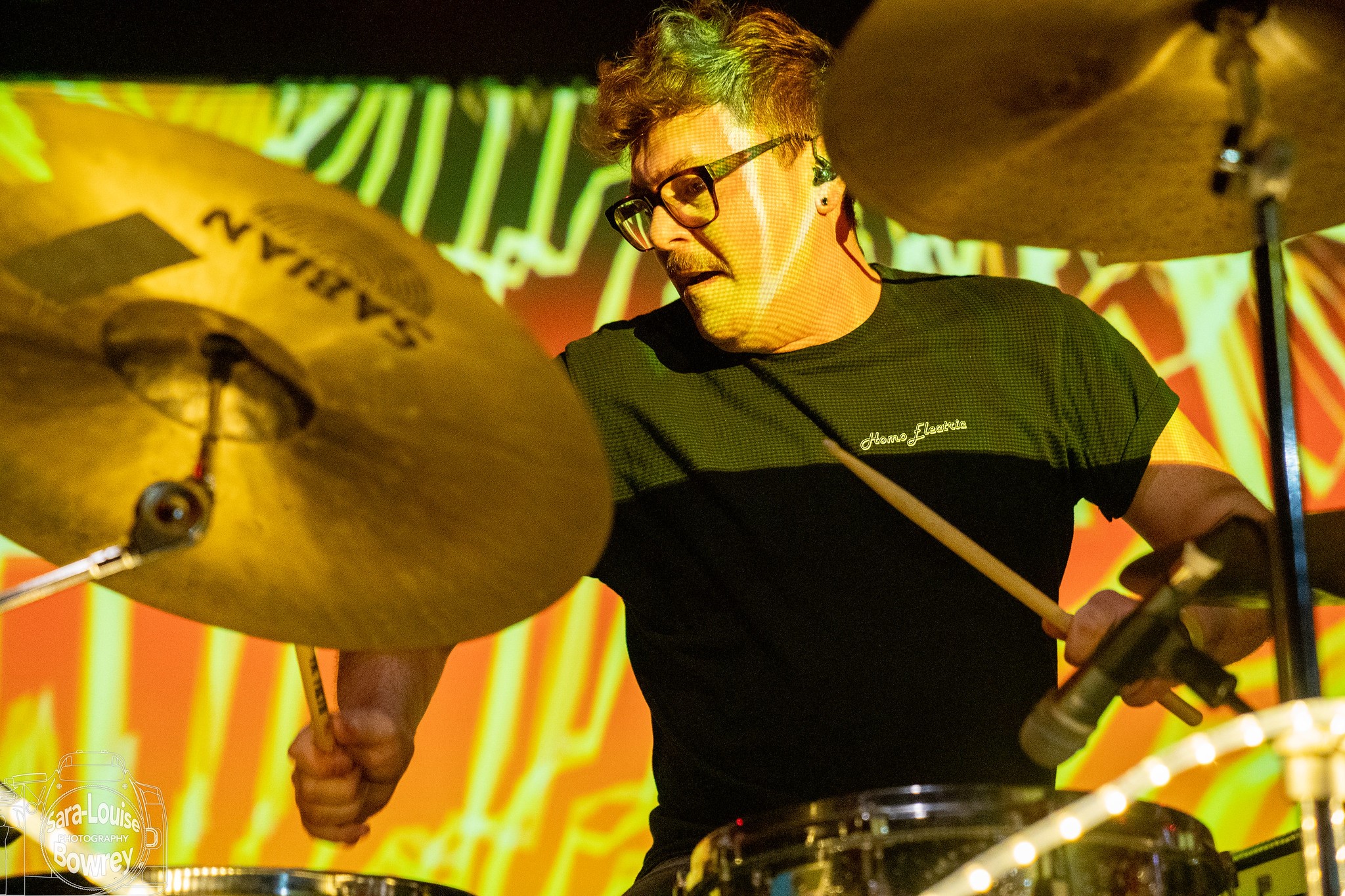 The audience didn’t quite fill the venue, but it is quite possibly the largest AK/DK crowd I have witnessed to date. The punters were certainly up for having a fab time. The anticipation was floating through the air, which no doubt was heightened somewhat by the fact that Ed and Gee had set up shop right at the front edge of the stage with their two drum sets and electronic gubbings. They clearly wanted to involve us during their all too brief 53 minute set. 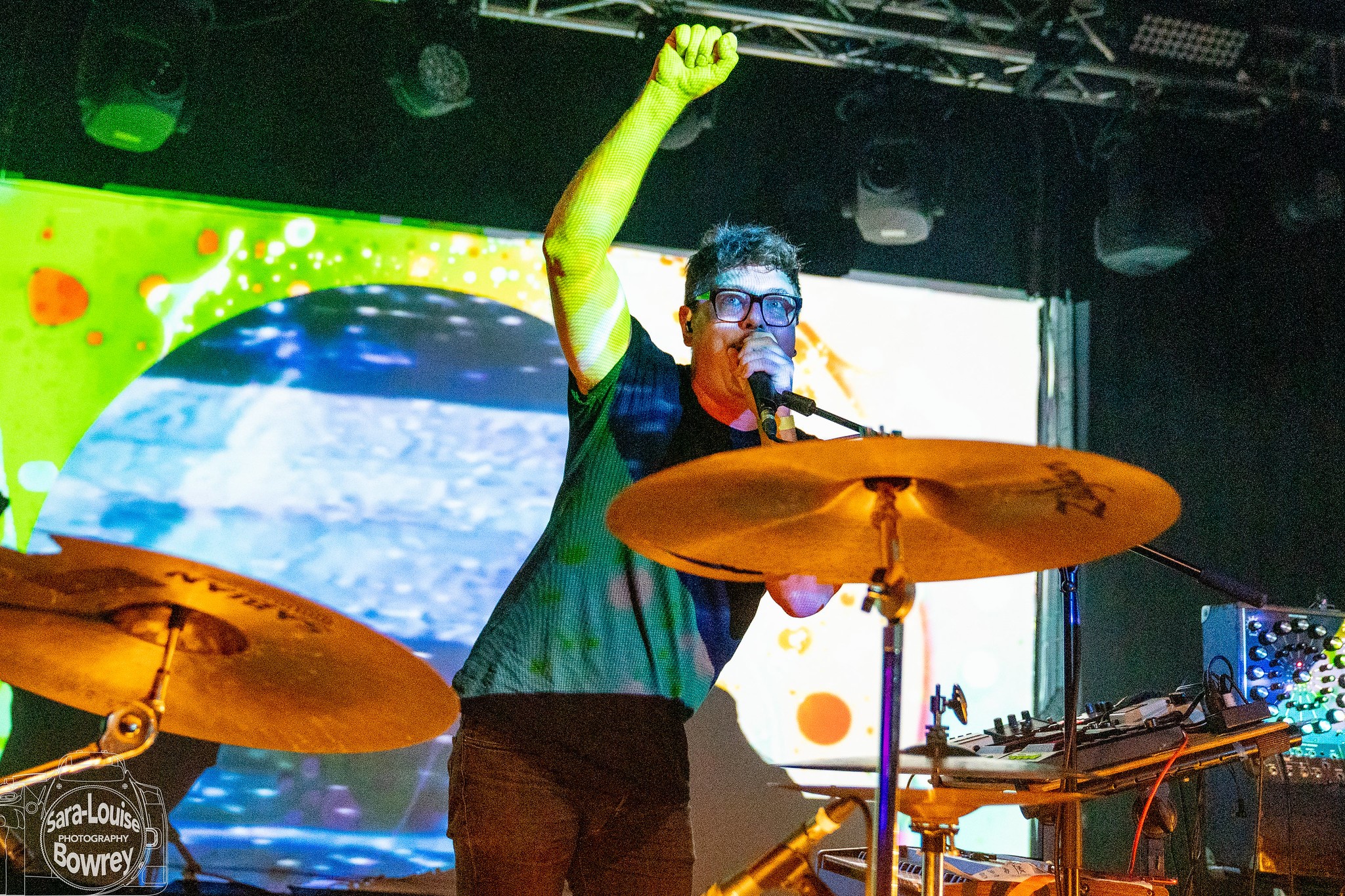 Myself and Jordan Mooney were stationed at the very front and I placed my drink on the actual stage. The second Gee hit his bass drum for set opener ‘Shared Particles’, the plastic container jumped. We initially watched with fascination as mine and others bounced sideways, but then I wasn’t going to chance any spillage and so I had to hold the drink instead. The vibrations and sound was very crisp indeed. CHALK certainly does have a great soundsystem. But I guess when you relaunch The Haunt as a more impressive venue, then the new expansive stage and lights will need the sound to boot. 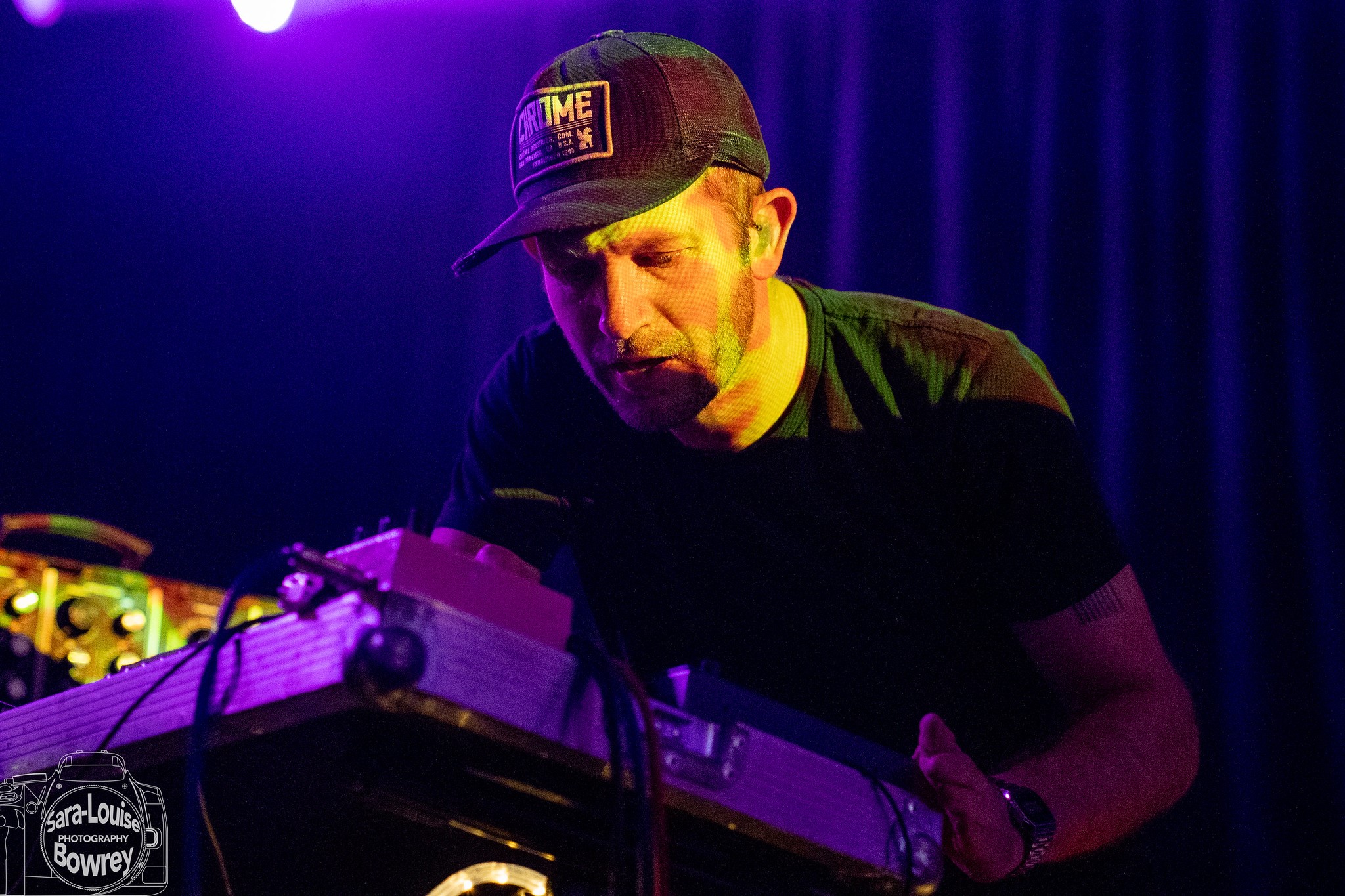 Within seconds Ed and Gee had us eating out of their hands. They are such likeable fellows! We got the uplifting Friday night vibe from the first trio of tracks, the aforementioned ‘Shared Particles’, along with oldest tune of the night, 2011’s ‘Lorem Ipsum’ from the ‘Dispatch #1’ cassette, which was followed by the unusually titled ‘Kosmiche #1’ from their latest platter. We were having a great time and I even rested my hands on a stage speaker in order to feel the music. Mind you, from that very first drumbeat from Gee, we felt the sonic waves hit us right in the chests. I turned around and my friend ‘two beers Jules’ was equally impressed. For those that are wondering, he arms himself with a beer in each hand for balance purposes whilst dancing and thus not spilling them – genius! 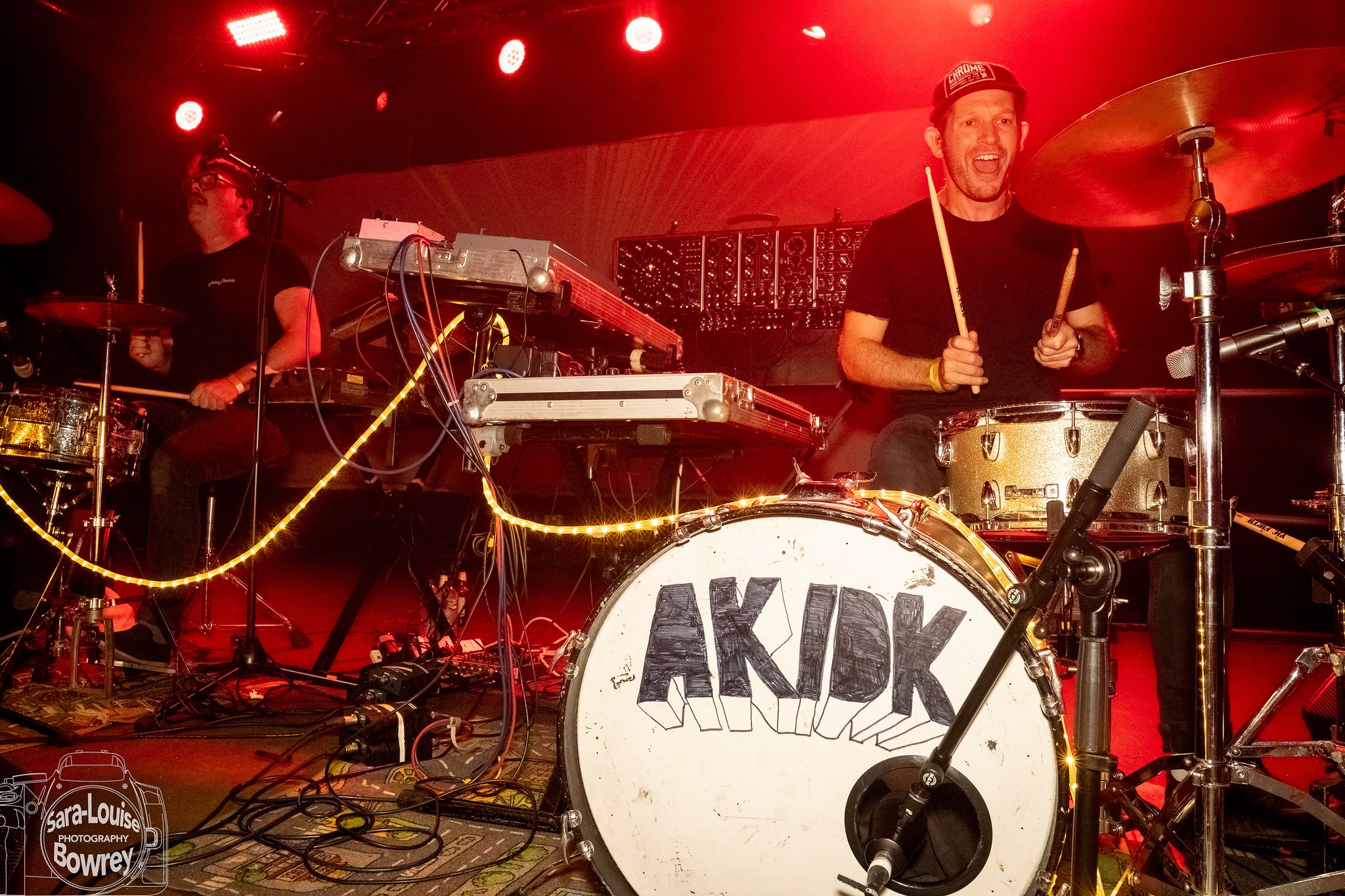 Ed and Gee had built up a decent sweat and decided to slow things down momentarily for just one tune as they chilled out to ‘Casio Beguine’, which I would suggest is a rumba beat tune, which they referred to as ‘Casiotone’. 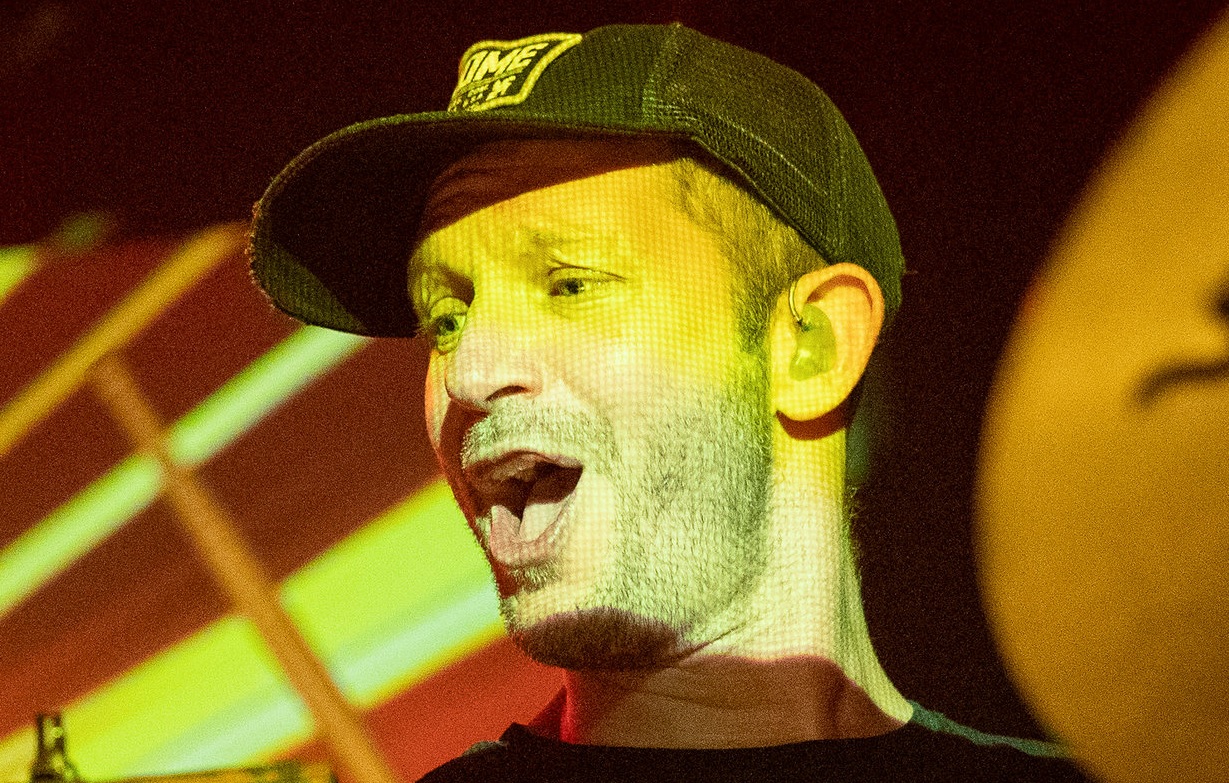 The anthemic sound was restored when 2014’s ‘Maxwell’s Waves’ from the ‘Synths + Drums + Noise + Space’ album was unleashed. They referred to this track as a “punk disco number as they are a punk disco band”. It’s very old skool Giorgio Moroder, when he was working with Donna Summer. You know the sound ‘I Feel Love’ and so on. 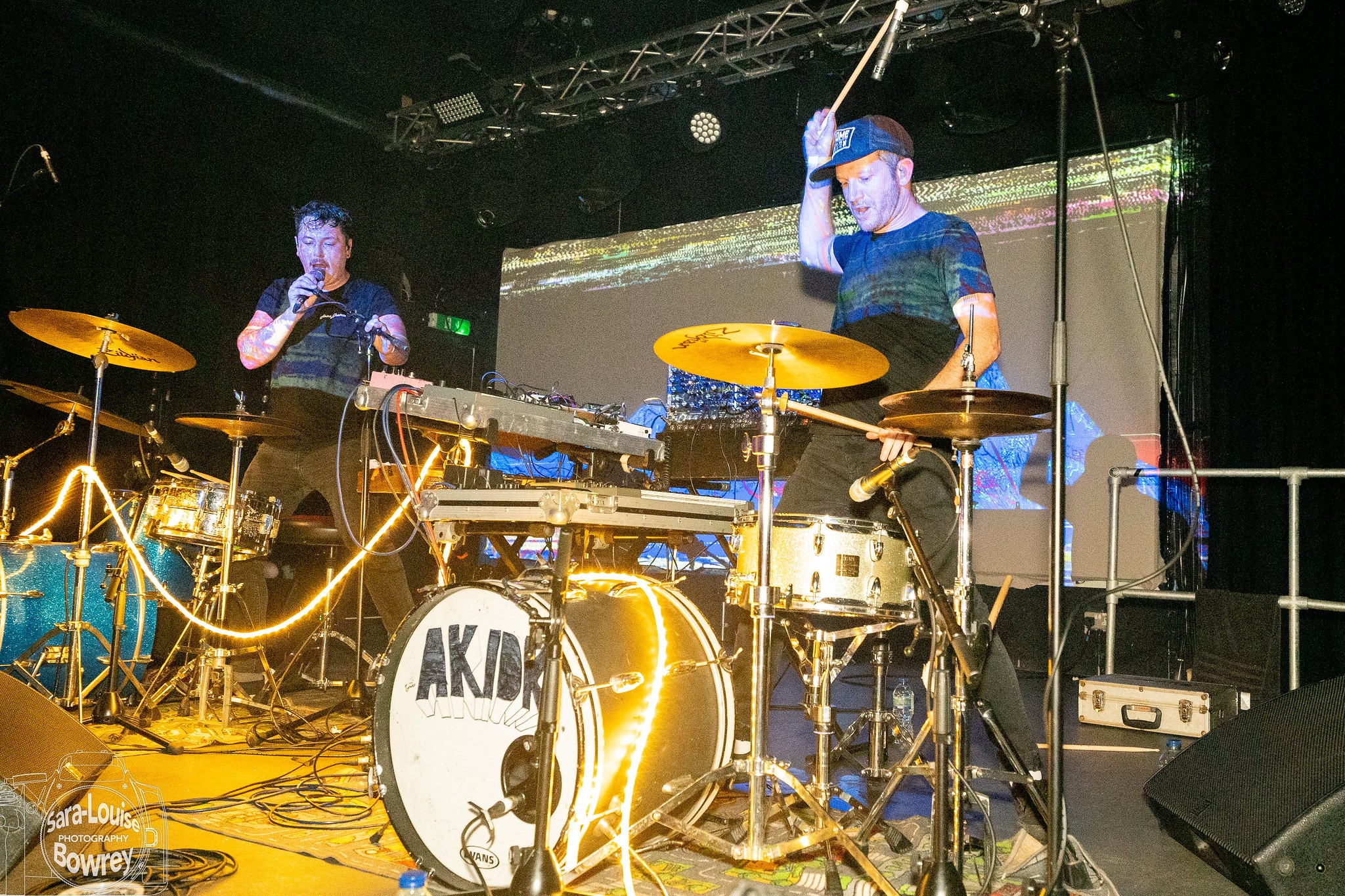 The duo were bashing away at their drum sets and Ed was busying himself with electronic wizardry all through their set. They both share vocal duties, which I noted this evening were a little down in the mix. It might have been where we were standing or that they simply needed to be a tad more prominent. This was most evident on ‘Feeds’ (found on 2020 ‘Shared Particles’ album) as Ed’s ‘Born Slippy’ “lager lager lager” style delivery was a little lost. 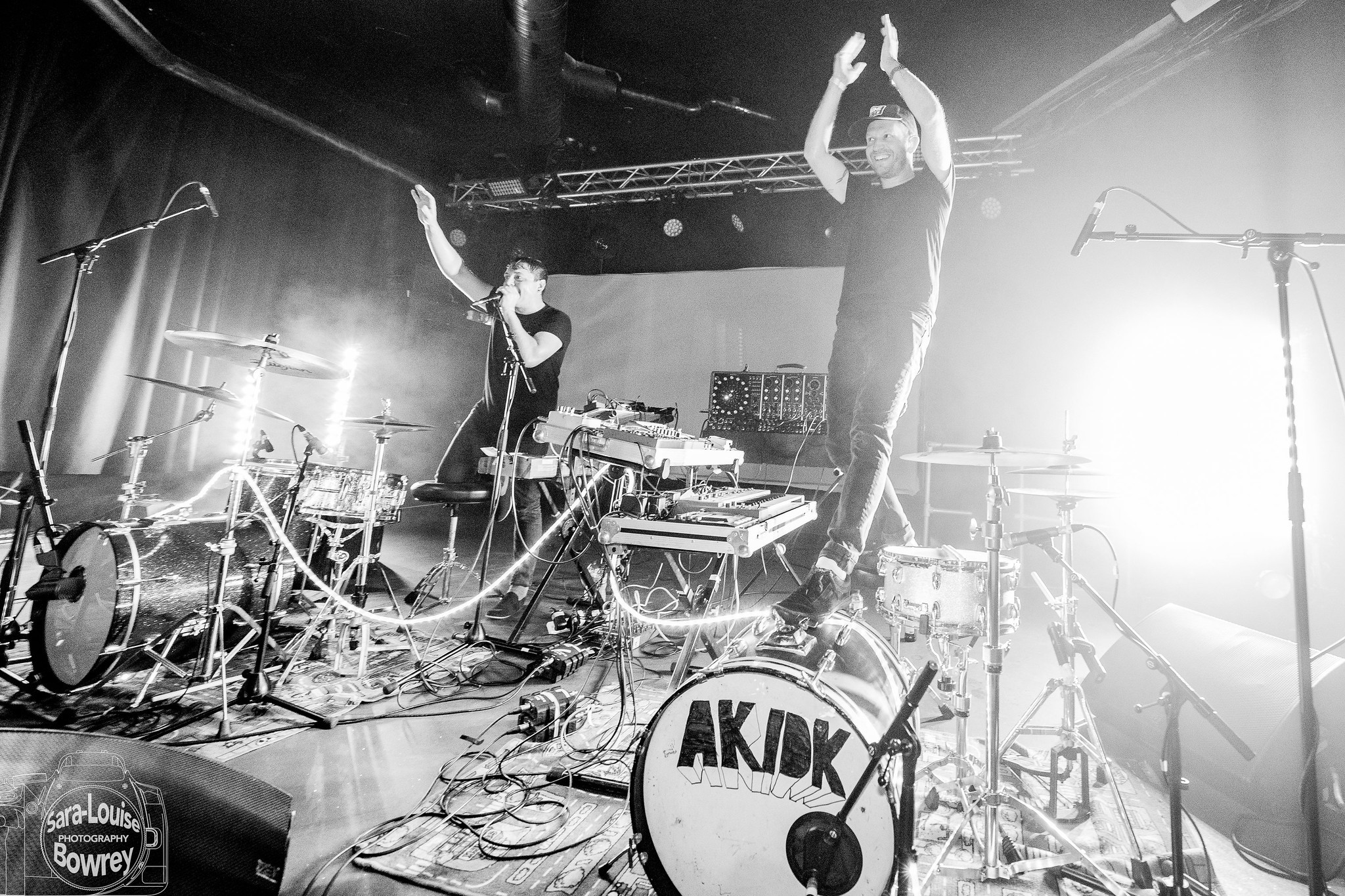 The penultimate number, ‘Battersea’, from their ‘Dispatch #3’ cassette, which saw the light of day back in 2013, reminded my girlfriend of a fairground organ. I would suggest a fairground organ on speed, if you catch my drift! 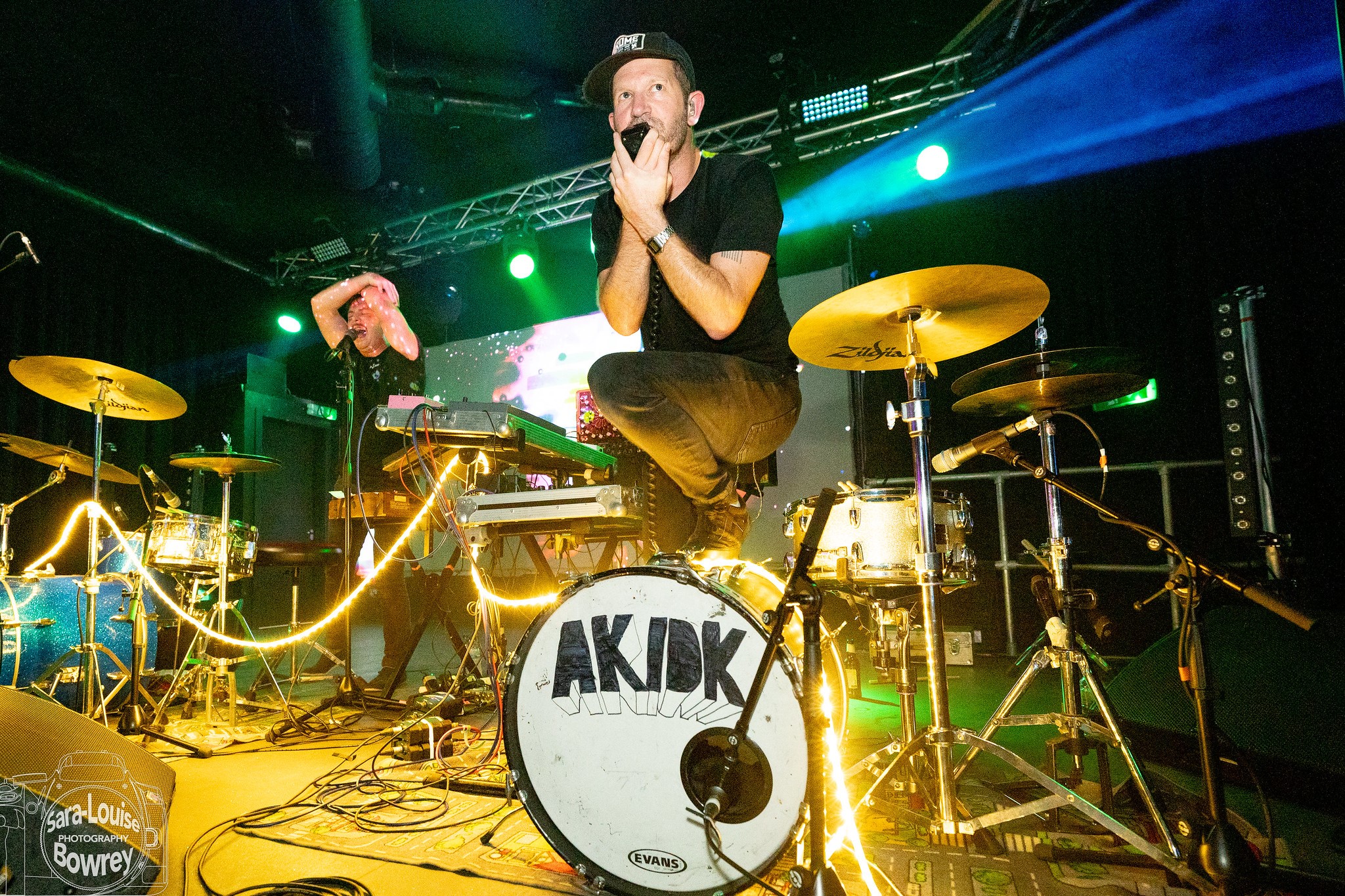 The finale was the Sigue Sigue Sputnik-esque ‘Morphology’ from their 2017 ‘Patterns​/​Harmonics’ album. This is a classic track. In fact AK/DK have many classic tracks and a majority of these had an outing this evening, thus the duo nailed it! It was the first AK/DK live encounter by our photographer Sara and also by my girlfriend Jordan, and after the concert had concluded at 9:46pm, they were both highly elated and most certainly wanted more of the AK/DK elixir. 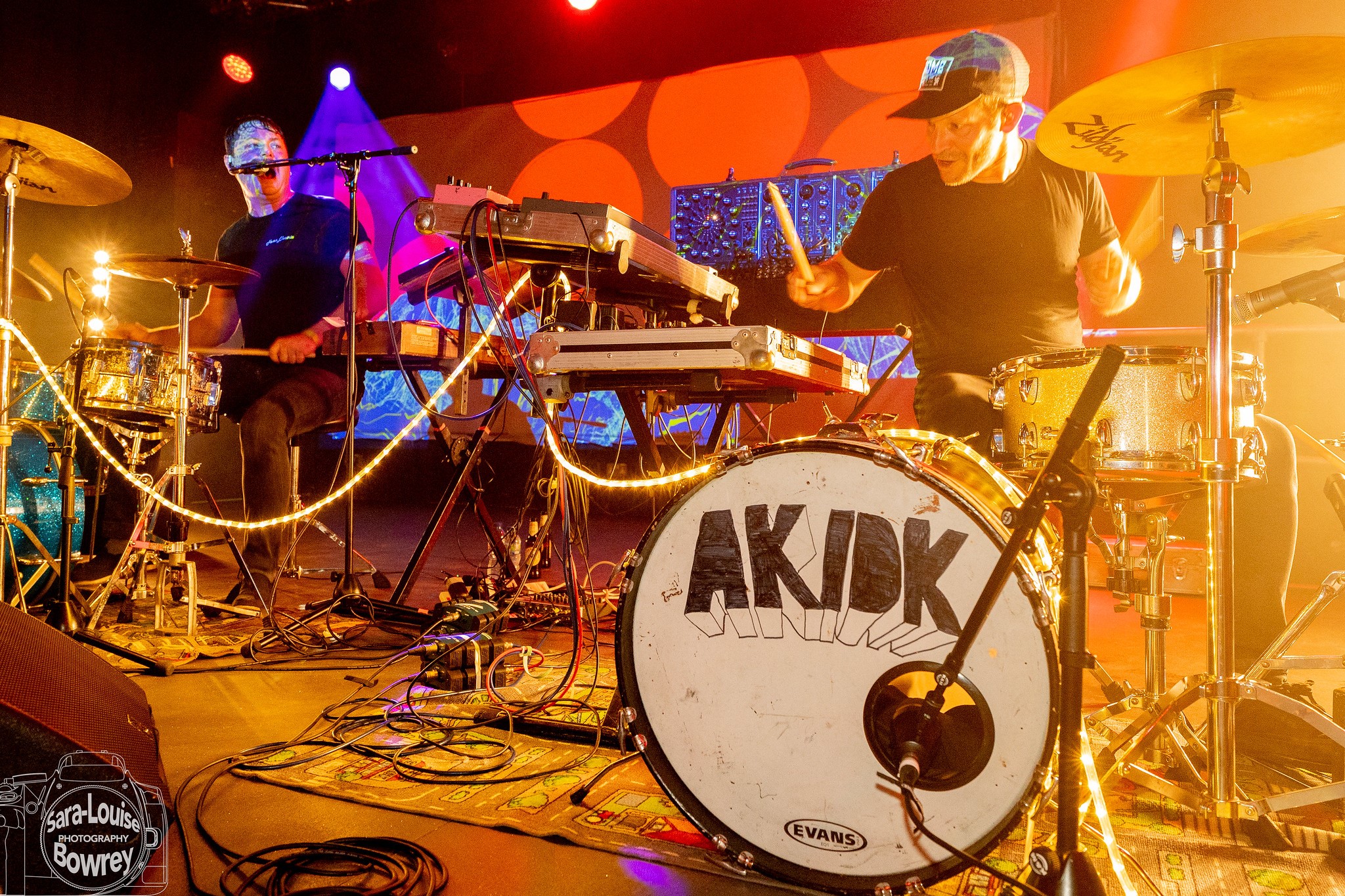 I then made my way to their merch stall and joy of joy, there was sitting there in front of my eyes a pristine vinyl copy of ‘Synths + Drums + Noise + Space’ – Mission accomplished! 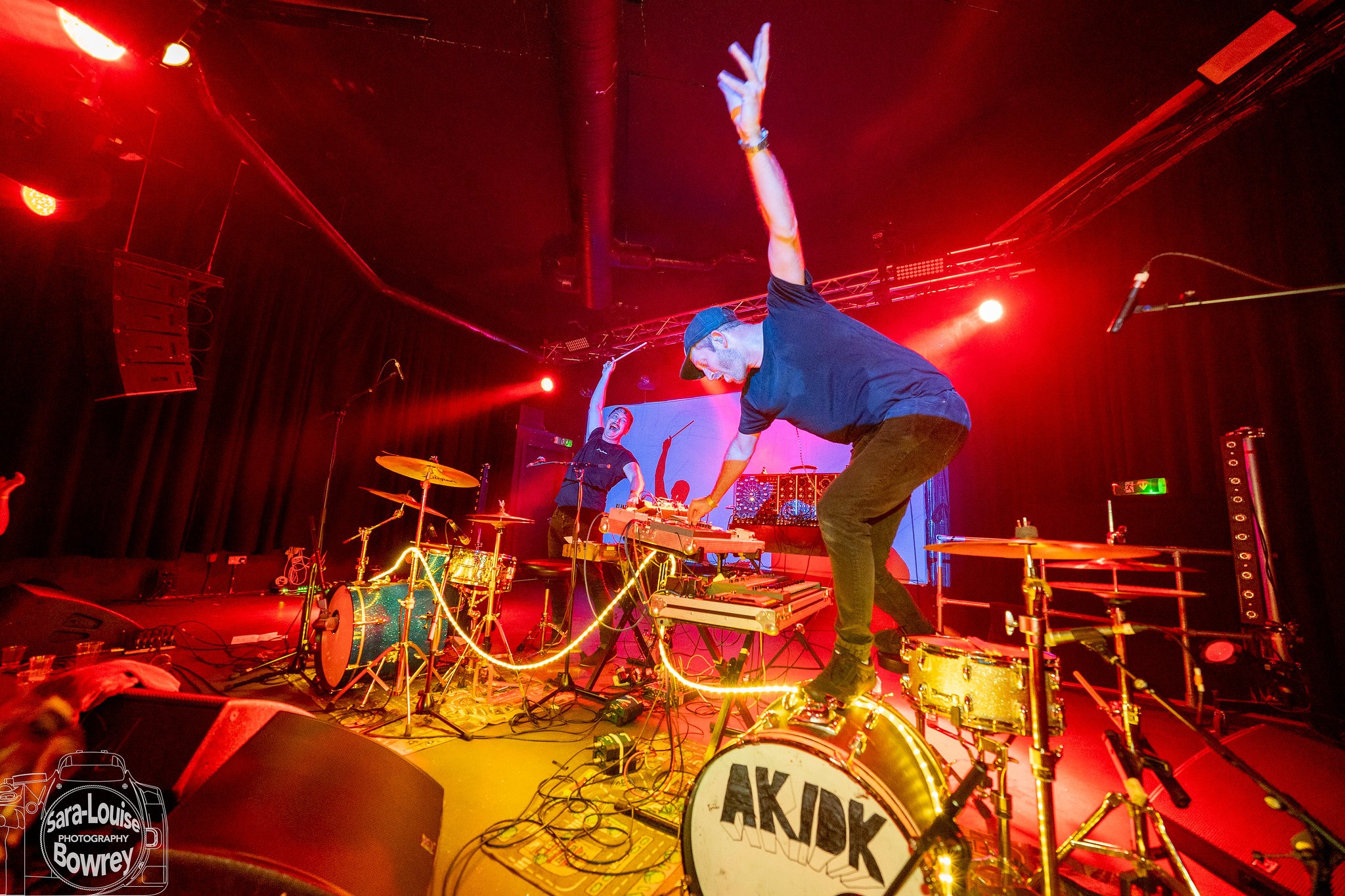 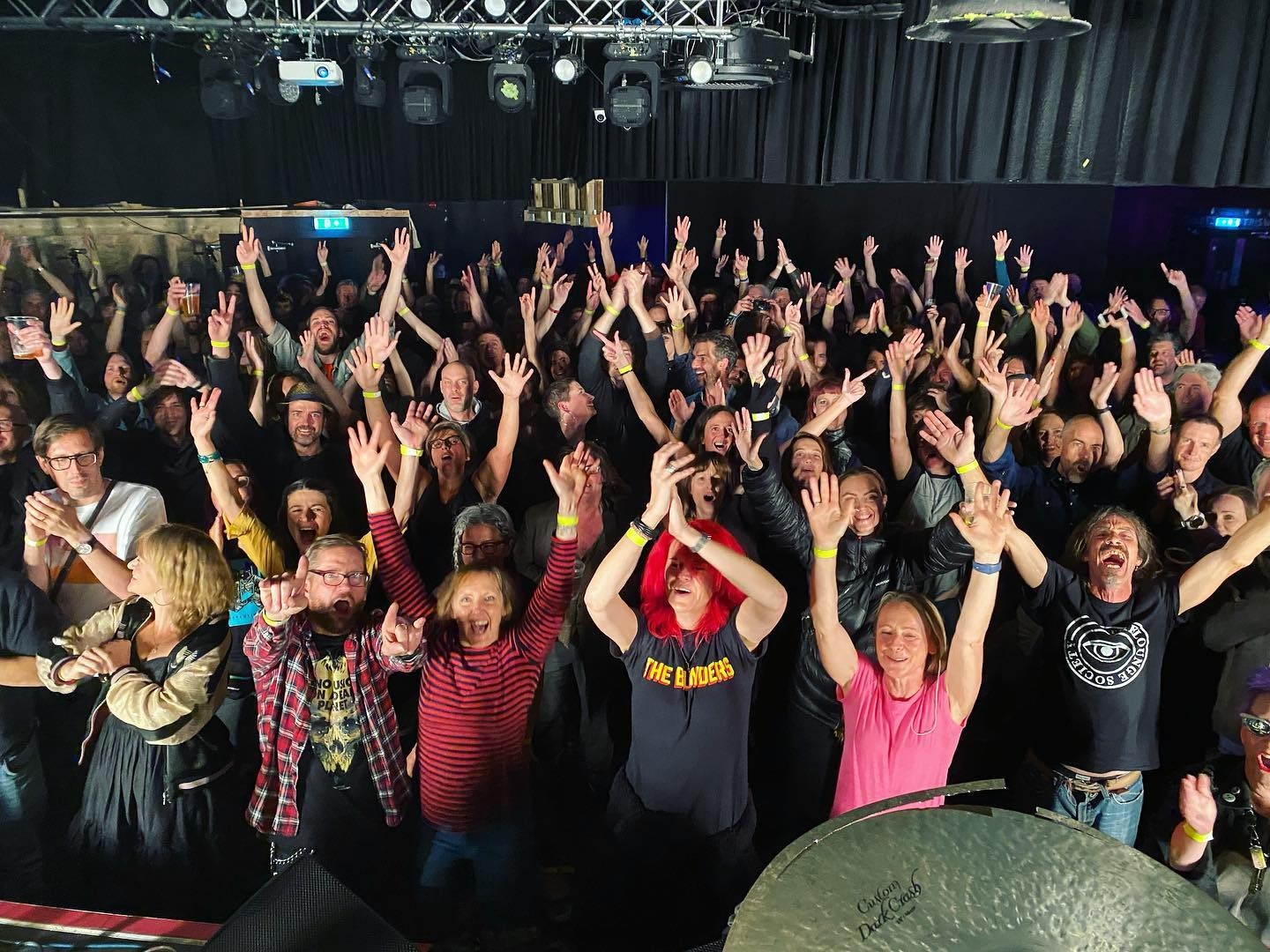 Some of the audience at the end of the AK/DK gig (pic Gee from AK/DK) (click pic to enlarge!) 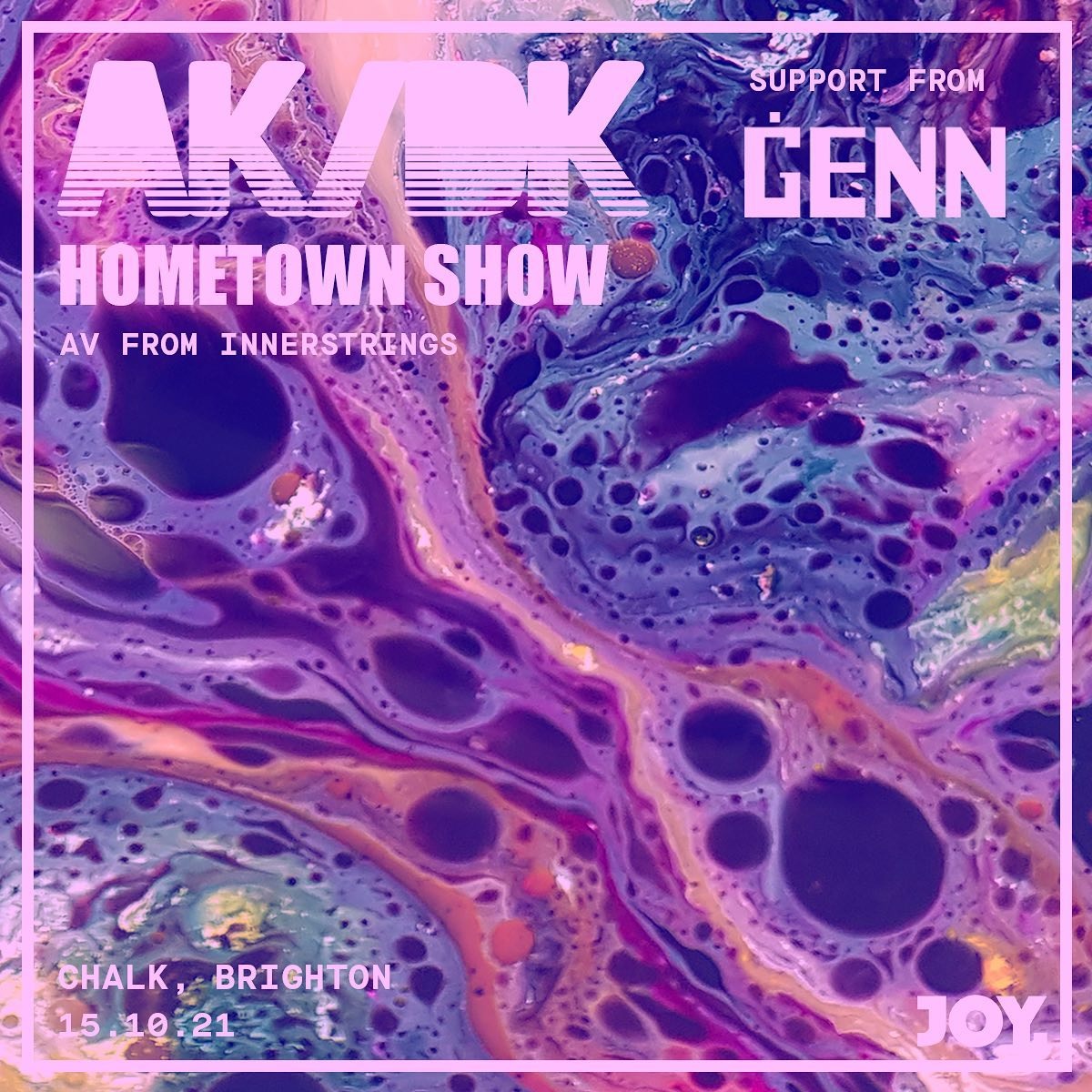