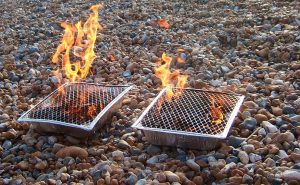 The co-op said that the move was made “to protect the environment at a time of greatly increased risk of fire” and “to protect our local wildlife and ecosystems.”

The council prohibited the use of disposable barbecues on beaches, the seafront and council-owned parks and open spaces from the start of last month.

The reasons for the ban included concerns about fire risks, health and safety and the effect on the environment. The council also highlighted the cost of clearing up disposable barbecues that had not been disposed of properly.

A disposable barbecue is believed to have been the cause of a major fire at the council’s waste transfer station in Hollingdean in August 2019.

Southern Co-op chief executive Mark Smith said: “We have had a longstanding commitment to reduce our impact on the environment.

“We’ve taken this additional step, to completely remove disposable BBQs from sale in all our 199 managed stores, to play our part in addressing the impacts of the extraordinarily dry conditions across the south.

“We hope our members and customers will support this important move to protect our local wildlife and ecosystems.”