A Brighton MP has called for action to protect people and businesses from high energy bills after a care home company told him that it was facing a five-fold increase. 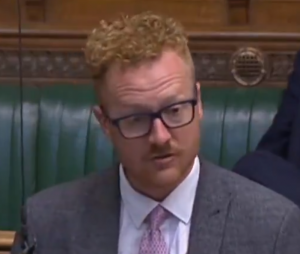 Lloyd Russell-Moyle in the House of Commons

Lloyd Russell-Moyle, the Labour MP for Brighton Kemptown, was shocked to hear that the local care home operator was quoted £790,000 a year for its energy bills, up from £152,000.

In a tweet yesterday (Thursday 1 September), Mr Russell-Moyle said: “We need to stop pretending this is all out of our control. Other countries are taking action to protect people. The Tories are driving us over the edge of a cliff.”

His comments come after the energy regulator Ofgem announced an increase in the energy price cap from the start of October from £1,917 a year to £3,549.

This followed an increase in the price cap in April from £1,277 to £1,971. Forecasters expect further price rises in January and April which could take household bills to more than £6,000 a year.

The price cap is the maximum amount that energy companies can charge and limits the standing charge to be connected to the energy grid.

The Labour MP said that the care company did not want to be identified because it did not wish to frighten its residents.

He said: “The fact remains that the increase from £152,000 to £790,000 is an astronomical increase but sadly it is not uncommon for businesses trying to lock in a new energy tariff right now.

“We are going to see mass bankruptcy without action and it will be squarely of this government’s own making.

“We have policy solutions to these problems but the Conservatives have decision paralysis either through a lack of leadership or are ideologically driven by a desire to let the free market destroy our economy.”

The council said: “The energy and cost of living crisis is already extremely hard for many people in our city.

“We’re looking at all possibilities available to us to help people. We know only too well that the heaviest burden for this crisis falls on those who are least well off.

“While draft guidance has been issued, we are waiting for the Government to confirm the level of support to be provided. We will prioritise distribution of this fund as soon as it is confirmed.”

The council added: “We all need clarity from government on the support they will be offering both to individuals and councils.”