Labour has won the East Brighton by-election, with former parliamentary candidate Nancy Platts holding on to one of her party’s safest seats on Brighton and Hove City Council. 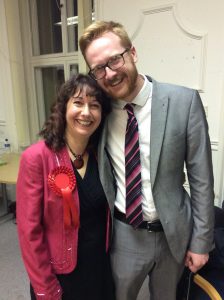 The by-election was held after the resignation of Lloyd Russell-Moyle who won a seat in the House of Commons at the general election in June, representing Brighton Kemptown.

After the declaration at Brighton Town Hall at about midnight, Ms Platts thanked her team as well as the returning officer and council chief executive Geoff Raw – and his staff – and her rival candidates.

She said: “Thank you to the people of East Brighton for placing their trust in me.

“I will be a strong voice for you and I will fight for East Brighton to get its fair share of resources.”

She added: “I will be campaigning to get your buses back.

“I will represent your views and ensure the council does everything it can to help within the financial constraints placed upon us.”