The person hit by a train at Preston Park Station this week was a 39-year-old Brighton man. 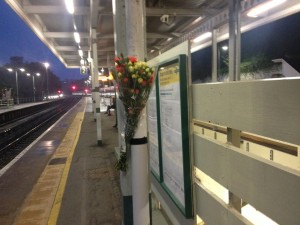 A floral tribute at Preston Park Station this morning. Picture by Tim Hodges

Floral tributes have appeared on the platform today in memory of the man who was killed at the station during the afternoon rush hour.

The incident at 5.40pm led to the blocking of the Brighton mainline and hour-long delays for several hours.

A British Transport Police (BTP) spokesman said: “I can confirm that the person struck and killed by a train at Preston Park railway station on Monday, 22 September, was a 39-year-old man, from Brighton.

“Our officers attended the incident, alongside colleagues from Sussex Police and South East Coast Ambulance Service.

“The man’s family has been informed.

“The incident is not being treated as suspicious and a file will be prepared for the coroner.”