A Brighton Hallowe’en event which aimed to recreate a zombie breakout was broken up by armed police after it was mistaken for a  terrorist threat. 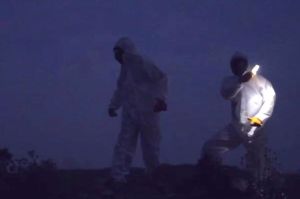 A member of the public called police at about 8.45pm on Sunday after seeing men wearing balaclavas and carrying guns at the entrance to Bullfinch Lane in Hurstpierpoint.

The men, who were dressed in black, appeared to be carrying rifles and pointing them down the road.

But what the onlooker and police didn’t know was they were really actors for the Outbreak Brighton event, billed as an “extreme physical immersive horror experience”.

Armed officers attended and a number of people in a van were arrested. Handguns and rifles were seized and examined but were proven to be BB guns. The organisers of the event, White Knuckle Events, were then contacted and given strong words of advice.

Superintendent Rex Matthews said: “We would actively discourage people from carrying even imitation firearms in any public place.

“The threat level from international terrorism in Britain is currently assessed as severe and there have been a number of terrorist plots thwarted.

“People are being asked to remain vigilant and to report anything that is suspicious.

“At times like this, incidents such as the one on Sunday are clearly going to worry local residents and the public who were unaware of the intentions of the event organisers.

“We would ask anyone organising such events to be mindful of how their actions could be perceived by others. Incidents such as this, where people are dressed in dark clothing at night and holding firearms, are likely to attract the attention of the police and those involved are inadvertently placing themselves at significant risk.

“While we do not in any way intend to stop people enjoying such events or indeed getting fully involved in Halloween celebrations, I would urge people to please use common sense before they get involved in such activities.”

Outbreak Brighton took place on Friday, Saturday and Sunday, with those taking part meeting in Brighton before being taken to a secret location in the South Downs.

Outbreak spokesman David Parker said: “Most of the participants thought the police were part of the event.

“It took a while for them to believe that the officers were actually from a real police force.”

He added police had been informed of the event.