A wet towel placed over a light sparked a fire which led to the evacuation of hundreds of guests at the Kings Hotel on Brighton seafront. 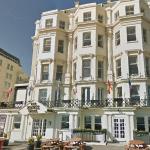 East Sussex Fire and Rescue Service was called at 2.42am this morning to reports of fire alarms sounding.

Two fire engines from Preston Circus rushed to the hotel, where they found a small smouldering fire. Crews used breathing apparatus and a hose reel jet to tackle the fire.

The hotel said the fire had been caused by a guest placing a wet towel over a light fitting and then leaving the room.

Hotel manger Shaun Donachie said: “It was very scary and that no one ever wants to get a call at 3am saying there a fire at your hotel.

“Obviously the hotel has a fire alarm system so it was picked up quickly, the fire brigade were here almost immediately and were able to put out the fire using fire extinguishers.

“What’s really unfortunate is that nearly all the hotel light bulbs have been changed to LED bulbs which probably wouldn’t get hot enough to cause a wet towel to dry out and eventually ignite but this one hadn’t been changed yet. Any remaining ones will be changed ASAP.”