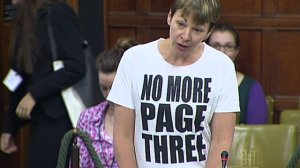 Although there has been no official announcement from owners News International, its other daily title The Times today reported that the paper was quietly dropping the tradition after 45 years.

The decision follows a successful grassroots campaign supported by hundreds of thousands of people. Brighton Pavilion MP Caroline Lucas was one of its most high-profile supporters, landing herself in hot water for wearing a No More Page 3 slogan T-shirt in Parliament.

Carmel Maria Offord, organiser of the campaign’s Brighton branch which has hundreds of members, was also celebrating this morning.

Huge congratulations & thanks to @LucyAnneHolmes & all @NoMorePage3 for such an amazing & inspiring campaign! #peoplepower