First towerblock at Brighton Marina begins to peek above the cliffs

The first of a series of towerblocks at the controversial Brighton Marina developments has started to peek above the cliffs. 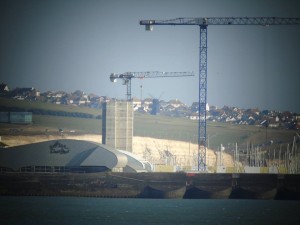 This picture, taken by Carol Homewood, shows the liftshaft of one of the towers shooting up into the sky.

Once complete, the rest of the block will be built around it – along with ten more towerblocks housing 853 flats, shops and leisure space, including new premises for Asda and McDonald’s.

The development, first approved in 2006 but tied up with planning negotiations, inspections and appeals, was only able to start in December 2013.

Another attempt by campaigners to have it halted is still making its way through the courts.

The Brighton Marina Action Group’s attempt to have a judicial enquiry held was rejected by a high court judge last summer, but an appeal is due to be heard into that decision imminently.