Another Hanover pub is set to change hands – but although its current managers will be leaving, pints should still be pulled there. 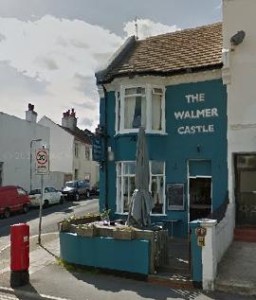 Kyrie Simon and Jai Foster are moving to The Farm Tavern in Hove after Hall and Woodhouse accepted an offer on the Walmer Castle on Queen’s Park Road.

But it’s understood the buyers of the Walmer don’t want to follow the example of the London Unity, Albion Inn and Horse and Groom, but instead invest in the pub and keep it running.

Kyrie said: “Jai and I are sad to be leaving because we felt like we did a lot to rebrand and promote the pub.

“We tried to make it family friendly, as well as put on game nights for a younger crowd and live music that would have suited all types of music tastes.

“We had ideas to redecorate and transform the pub further but once we knew that it was being sold we had to cancel all our plans.

“It hasn’t been an easy transition for us at all. In four months Jai has had about four or five days off including Christmas Day and New Year’s Day.

“He especially has put a lot of time and effort into the pub and so it is a shame to see his efforts go awry.

“Having said this we are excited to move on to The Farm Tavern in Hove. We hope that when any of the people we have met during our time at The Walmer Castle are in the area they will pop in and say hello.

“We have met some lovely and welcoming people during our time in Hanover and wish the new owners all the best.”

A spokesman for Hall and Woodhouse said: “We have been marketing the freehold interest of the Walmer Castle for sale through A W Gore & Co.

“We are not normally in the business of selling our public houses but in certain circumstances, such as the Walmer Castle,  it is right for Hall and Woodhouse to do so.

“As a family-owned business we try to live within capital and any proceeds made from disposals are always reinvested into our trading estate.

“We have received and accepted an offer for the Walmer Castle, the holding Business Partners (tenants) are fully aware of the current situation.

“As far as I am aware the buyers intend to invest in the public house and continue to trade it as a going concern.”