Hundreds to raise money for RNLI on waterslide in Brighton today

Hundreds of people will slide down one of the main roads in Brighton on a 100-metre waterslide today (Saturday 21 March).

They will be raising money for the RNLI as they try out the Slipway Slide which is in Edward Street for the day. 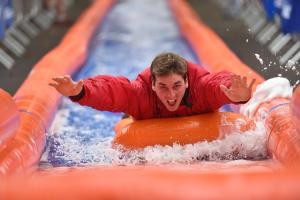 The charity chose 360 winners of a text competition to ride the slide, with 2,500 entering, raising £2,500 so far. Collectors hope that spectators will donate coins and notes today adding to the amount already raised.

RNLI project manager Tim Robertson said: “Slipway Slide is a really unique spectacle for Brighton as riders get the chance to slide down one of the town’s busiest streets.

“RNLI lifeboat crew members are on call 24/7. Most have a full-time day job but they carry a pager and, when it goes off, they rush to the lifeboat station and launch the lifeboat – often down a slipway – to rescue those in danger.

“All profits from the event will go to saving lives at sea. This means crew members have the right kit to keep them safe and dry and vital training to ensure they bring everyone home safely.”

The slide will be in action from 11am until 4pm, with the road closed from this morning for the duration of the event.

The RNLI Brighton lifeboat is based at Brighton Marina. It has already been launched nine times this year.

Thief steals jewellery from pensioner during move from Saltdean to Peacehaven