Cyclists riding on their way to work via The Level were given the star treatment by a flashmob this week. 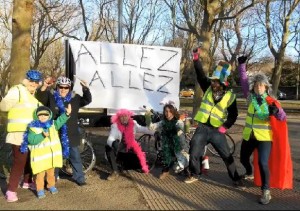 A group of cheerleaders, calling themselves Cyclists are Heroes, dressed up in wigs and feather boas with a sign reading “Allez, allez”, and shouted encouragement to passing cyclists.

Inspired by a similar event organised by Cyclists are Heroes in Islington last month, which gave two-wheeled commuters the Tour de France treatment.

“On Monday morning, we staged a cycling flash mob in Brighton and Hove, giving the cycling commuters the kind of reception only Tour de France riders usually get.

“We certainly put a few smiles on faces.”