Battle of Brighton’s Lanes heats up

Brighton is being asked to decide between sacrificing North Street’s oldest building or losing the chance to open up The Lanes and with them a historical cottage which has lain hidden for 150 years. 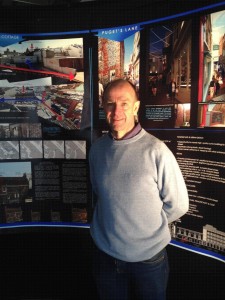 Developer RBS has applied for permission to knock down newly-listed North Street building, Timpson’s, in order to create a new twitten and open up access to a forgotten house now christened Puget’s Cottage.

The cottage was discovered when heritage campaigner Roger Amerena inspected the site after the developer submitted its first application.

It wants to revamp the area formerly occupied by the Hannington’s department store, from East Street to Meeting House Lane.

RBS has since been given permission to redevelop the site without knocking down Timpson’s, but says if its new application to knock it down and build a new lane is not granted, the hidden cottage will remain locked away for another generation.

But fighting to save the North Street shop are the heritage campaigner who got it listed – and the descendant of the shopkeeper who ran a hosiery business there in the 1830s, Jean Clack.

Architect John McLean, partner at Morgan Carn, said: “Puget’s is in a completely different league to Timpson’s. There are lots of other examples of single bay shops in the Lanes.

“This is a people power thing. The message we are getting from the politicians is that if the local people and traders want this, they will support it.

“And we’re not even having to try to convince people – they’re coming in and saying it’s so obvious. There’s a groundswell behind it.

“A survey found that almost eight out of ten tourists couldn’t find The Lanes. They’re our crown jewels, and they’re in decline. That’s why this link is so important.”

However, Roger Amerena, who “rediscovered” Puget’s Cottage after asking staff at Timpson’s to let him look in their back yard after the first application went in, said Timpson’s, Puget’s and the yard and path between them were a “microsite” and should all be preserved.

He said: “The developers have chosen to not recognise the possibility of an alternative route past 15 North Street (Timpson’s).

“I have always maintained that everyone could be happy if the new Lane, which we all agree on, could go through the unit to the west of number 15, through the ground floor, similar to the modern route through to Duke’s Lane from Ship Street.

“With a double pitch roof, a shop front restored to near original 15 North Street could be a smash hit – the last surviving property from the north side of the eighteenth century town there, and still trading.

However, Mr McLean  countered the suggestion of running the new lane through part of the former Cargo unit, underneath the existing top storeys, saying: “An underpass like that would become an impromptu bus shelter or attract rough sleepers.

“It’s also not in keeping with the historic Lanes, which are all open to the sky.”

And RBS also has the support of the city’s Regency Society. Chairman Roger Hinton said: “You are creating an additional entrance into the shopping Lanes. That’s a bold and very commendable development in our view.

“It will increase tourism and employment -you’ll be able to go from the Royal Pavilion straight into the Lanes and past the Town Hall onto the seafront.

“The prospects for Timpsons are very poor if it were not to be demolished as the money needed to restore it would never be commercially justified.

“Putting all this together we came to the conclusion it’s worth the loss of one listed building.”

However, the developers will have a tough time convincing 77-year-old Jean Clark, who only recently discovered her ancestor Mr Perry ran a hosiery business from 15 and 16 North Street in the early nineteenth century.

She said: “The family always knew we had an ancestor who had a business in North Street somewhere along the buildings which had been Hannington’s.

“It was only when I read about the proposed development that I did some research, and discovered that it was number 15 and 16 that he was carrying out his business – and living there as well.

“Now that I realise that it was in the family, from my own personal point of view I would like to see it preserved – it’s quite something to have that history.”