A cat who had been missing for 18 months was found in a Brighton yard after travelling 50 miles to get back home. 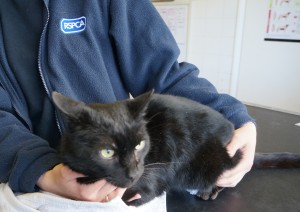 Spider’s owners had moved from Brighton to Bermondsey when he went missing, and were ‘ecstatic’ to be reunited with him after so long.

He was found last Thursday in an enclosed back yard in Marine Parade, close to where he had previously lived.

A member of the public reported the issue to the RSPCA after they said they had heard him miaow-ing. A microchip was out of date, but contained the details of the local vet, who revealed the owner was living 50 miles away in London.

RSPCA inspector Liz Wheeler said: “This case shows how important it is to get your cat microchipped, and keep those details updated.

“Spider was incredibly nervous after being in that courtyard for a few days. We do not know what must have happened to him for the 18 months in between being found and reported missing – but the owner was ecstatic to find him again after so long.

“He was well fed, though, so I suspect he had been cared for by someone in the meantime.”

For more information about microchipping, please ask your vet or click here.