The Volk’s Electric Railway Association (VERA) is putting the plans on display at the Yellowave clubhouse, in Madeira Drive, from 1pm to 5pm.

VERA said: “Plans for the rejuvenation of Volk’s Electric Railway are at an advanced stage and this will be an opportunity for members of the public to talk to the architects and consultants. 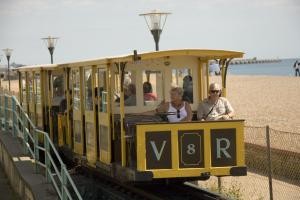 “A model of the proposed new Aquarium Station and visitor centre will be on display, as will detailed plans of the new sheds at Banjo Groyne.

“Photographs of the three cars selected for restoration will also be available.

“No need to book – just drop in anytime. We look forward to seeing you and hearing your comments and suggestions.”

The plans are going on display almost a year after Brighton and Hove City Council won a £96,000 “first round bid” from the Heritage Lottery Fund.

With public backing, the plans are expected to bring a further £1.5 million from the Heritage Lottery Fund, with work scheduled to be completed in 2017.

The railway, which runs for a mile along Brighton seafront from the Palace Pier to Black Rock, opened in 1883. It is the oldest operating electric railway in the world.

The proposed visitor centre is intended to tell the story of the pioneering Magnus Volk and his narrow-gauge railway.

The project also includes plans for a conservation workshop to protect the historic carriages, enable restoration work to be viewed and provide training for volunteers to develop their skills.