People living in St Aubyn’s Road were left scratching their heads this month when a no entry sign was put in their street – right next to another one. 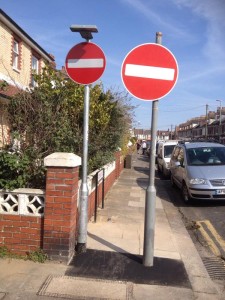 But the council has explained that the double sign is intentional, and the old sign on the right will be removed once the electricity supply to the lighting on the new one is connected.

“In the picture provided, the post on the right is due to be removed as part of routine maintenance. A new post has been installed at the back of the footpath because this is a better position for signage.

“The next stage is for the cable network operator to disconnect the existing electrical supply from the old post and connect power to the new one instead.

“Once the electricity supply has been transferred, the council will safely remove the old post.”