Cyclist appeals for help tracking down hit and run driver

A cycling enthusiast is appealing for help in tracing the driver of a car that hit her as she rode along a cycle lane in Hove last week. 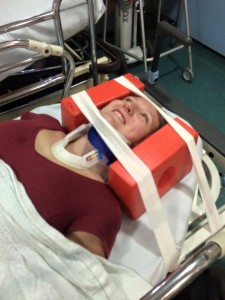 Lucy after her accident

Lucy Rowe, 20, who works for Cyclelife Electric in Brighton Marina, was hit at 9.10am on Friday as she rode south along The Drive by a black 4×4 which did not stop.

She fell from her bike and hit her head on a traffic light, leaving her with whiplash, bruises and grazes. Police have appealed for witnesses to the crash.

Lucy said while she was eager to track down the driver, she was also keen to stress that cycling is not usually a dangerous way to travel.

She said “Perhaps the driver was unaware that the highway code rule 211 states driver should be especially careful when turning, and when changing direction or lane, and to be sure to check mirrors and blind spots carefully.

“Here at the shop we do quite a lot of work with different parts of the council around road safety and shared space.

“There’s a huge amount of effort put in by a lot of people to make roads safer for cyclists.

“I was very lucky and escaped with just a few aches and pains, but I really want to track the driver down.”

A police spokesman said: “Police are appealing for witnesses to a collision in Hove on Friday (April 24) that left a cyclist in need of hospital treatment.

“The 20-year-old woman from Hove was cycling south along The Drive when a large black vehicle turned across her path at the traffic lights at the junction of Cromwell Road causing her fall from her bike, hitting a traffic light and banging her head.

“The car, a VW Tiguan, did not stop and continued east along Cromwell Road.

“The woman was taken to the Royal Sussex County Hospital in Brighton where she was treated for minor injuries including grazes, bruises and whiplash.

“No report has been received by the car driver and police would like to hear from anyone who witnessed the incident or who has any information about it. Please email 101@sussex.pnn.police.uk or call 101 quoting serial 319 of 24/04.”