Court sentences Hove pub customer for attack after being barred

A court has sentenced a Hove pub customer who attacked the manager and a customer after being barred from the premises. 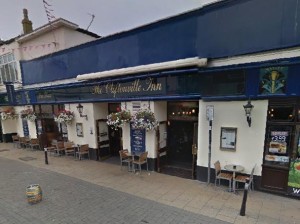 Joseph Wareham, 27, went into the staff area of the Cliftonville Inn, in George Street, Hove, where he spat at the manager and threw punches at him.

A customer came to the 31-year-old manager’s aid and they got Wareham outside.

But then Wareham kicked the manager, punched the 42-year-old customer in the face and hit him with a chair.

The attack happened shortly before 5pm on Sunday 18 January after Wareham had been barred from the pub by the manager.

Wareham, of Gladstone Road, Portslade, pleaded guilty to assaulting both men when he appeared at Brighton Magistrates’ Court.

He was made the subject of a supervision order, ordered to do 200 hours community service and told to pay £150 compensation and £85 court costs.

PC Dan Patterson said: “This was an entirely unprovoked attack on a man trying to do his job and a member of the public who acted like a good samaritan.

“We will not tolerate any incidents of violence and would urge anyone who sees something like this to contact us immediately.”