Commonwealth observers look at conduct of election in Brighton Pavilion

A group of Commonwealth politicians and officials have spent the week observing the conduct of the election in Brighton Pavilion.

They were at the count overnight and yesterday visited the First Base day centre run by Brighton Housing Trust (BHT). 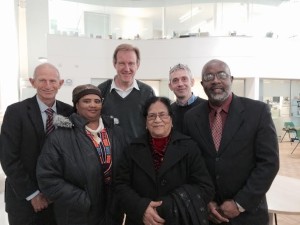 At First Base the manager Simon Hughes, BHT chief executive Andy Winter and clients spoke about efforts to register people living on the margins of society so that they could vote.

They are part of a group of 22 Commonwealth MPs and electoral officials observing the general election in six constituencies across the country.

The visit has been organised by the Commonwealth Parliamentary Association UK.

The mission will collate its observations of election conduct and processes in a report including recommendations for improvements, which will be submitted to the Electoral Commission.

Mr Jackson said: “I greatly look forward to the opportunity to engage with the democratic process in Brighton and the UK.

“The 2015 election promises to be a remarkable one for both country and constituency, with more parties contesting more seats, and we wish the British people well in the exercise of their franchise.”

Mr Winter said: “The Brighton Pavilion constituency is one of the more fascinating seats in the country, where political activity is energetic and sometimes contentious.

“It is also a constituency with massive contrasts between affluence and poverty, poverty most visibly represented by men and women living on the streets.

“Not only can homeless men and women be excluded from housing and services, they can also be disenfranchised.

“That is why we have run a voter registration campaign from First Base to ensure that homeless people at least have the opportunity to be involved in the democratic process.

“It was particularly special to meet the Honourable Sophia Swartz from Namibia.

“Had I stayed in South Africa and obeyed my call-up to the apartheid army, I would have certainly found myself in armed conflict with Namibia’s liberation army, SWAPO, which is now the party of government in that country.

“For me it is a cause of joy and celebration that democracy has become embedded in South Africa and Namibia, and that a delegation of election observers to Britain now includes a representative from southern Africa.”