Brighton’s gateway gets another stunning graffiti mural to welcome visitors

Another Aroe MSK mural has popped up on a scruffy Brighton street after the council asked householders to spruce up their paintwork. 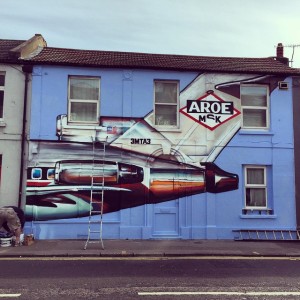 The renowned street artist painted his first Viaduct Road mural in March after the landlord decided to thumb his nose at Brighton and Hove City Council’s request.

And now, he and fellow artist Solveig Maseyk added another mural opposite, this time of the Beastie Boys’ Licensed to Ill cover art, featuring the tail fin of a Boeing 727.

Tweeting before he started on April 28, he said: “‘Let me clear my throat…’ Today with my trusty assistant @solveigmaseyk_ we are going to smash the front of this house.”

And once finished, he tweeted: “Made from different stuff. The one man army. Licensed to skill, Brighton UK 2015.”

The requests were made by the council’s environmental team in response to a request from the London Road Area Local Action Team, which is working to improve Viaduct Road, which it describes as a gateway to Brighton.

LAT chair Philip Wells, who is also pastor of Calvary Church opposite the new mural, said it was great to see the street being brightened up, however unorthodox the methods.

He said: “I don’t think the brushwork is quite as good  and I don’t think it fits quite as well as the other one but it’s always nice to see something creative and people making an effort.

“I wouldn’t like to see every house done like that. I like to see the road looking fresh and I think creativity and variety is part of it.

“There’s other houses that have been painted up as well, about four or five, so it’s all looking up.

“People are putting a bit of care and effort into their properties.”

Last month, Aroe MSK painted another mural on a Brighton home – unbeknownst to the student occupants who woke to find a giant Bart Simpson on their wall.

His Beastie Boys mural led to a commission for another similar mural at the HQ of an aviation company the following week.

The drive to improve Viaduct Road has also included the controversial trial of plantpot chicanes, which started in February and have been credited with slowing traffic by about 20mph – but still not below the 20mph speed limit.