More than a hundred heroes – and villains – raised £18,000 for charity as they made a run for it along Brighton and Hove seafront yesterday (Sunday 17 May).

The costumes included Cruella de Vil, the Green Cross Man (remember him?) and the Grim Reaper as well as the usual smattering of Batmen, Catwomen, Spidermen and Wonder Women. Not to mention Penelope Pitstop and a very youthful Dick Dastardly. 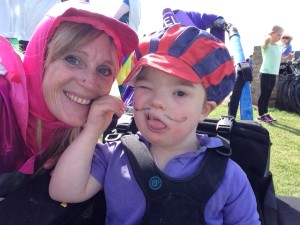 Pippa Hodge and Leo as Penelope Pitstop and Dick Dastardly

Forget speed. Capes fluttered freely in the annual Heroes Run – a contest that is more about the outfit than the race.

Adorning the starting line up on the prom next to Hove Lawns there was latex, lurex and lace – or possibly tulle. A few women and, yes, a few men donned a tutu.

The goal – to raise £20,000 – is within reach and the money will go to Pass It On Africa. It will be used to help build schools and fund children with an education in some of the poorest parts of Africa.

Brighton therapist and film-maker Jason Halliwell captured the flavour of the event with a video which he has posted on YouTube.

Pass It On Africa said today (Monday 18 May): “A huge, huge thank you to every single man woman and child who made yesterday’s race so memorable.

“It really does mean so much to us each year that you all go the extra mile to not only look amazing in your costumes but also support our charity.

The charity was started 10 years ago by James Macdonald and Matt Lambert. They ran the Dublin Marathon to help raise £1,000 to buy shoes for the orphans of the Tenderfoot School in the Kenyan capital Nairobi.

The pair soon learnt that Tenderfoot desperately needed more than just shoes and set up a charity to build classrooms for the school.

They also really enjoyed dressing up as superheroes for the marathon but were surprised by how few costume runners there were.

So they created a dedicated superhero fancy dress run and the Heroes Run was born.