Police searching for a man responsible for a vicious attack on another man in St James’s Street, Brighton, have issued images of the suspect. 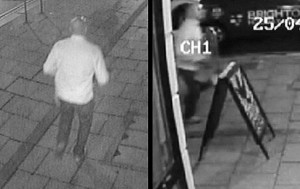 The 43-year-old victim was approached by an unknown man at 12.15am on Sunday, April 26, as he crossed the junction at Chapel Street.

He was punched in the head, kicked in the leg and as he fell to the ground, the man continued to beat him.

He suffered a broken ankle, broken finger, swollen jaw and cuts to his face and elbow. He was taken to hospital for treatment.

Police made a search of the area for the suspect after a witness saw him run up St James’s Street towards Charlotte Street, but could find no trace.

The suspect is described as white, 5ft 8in, of stocky build and with short dark hair. He was wearing a shirt, possibly dark blue with dark red stripes, and dark trousers.

Detective Constable David Rose said: “This is a serious and unprovoked attack on a man that was walking home after a night out.

“We would ask that anyone who was in the area at this time or who recognises the suspect to come forward.”

Anyone who witnessed the incident is asked to call 101 quoting serial 31 of 26/04. Alternatively, call the independent charity Crimestoppers anonymously on 0800 555 111.