Brighton cyclists on epic ride from Orkney to Paris

Two Brighton cyclists have set off today on an epic charity cycle ride from Orkney to Paris – with a few rounds of golf and some aikido lessons thrown in. 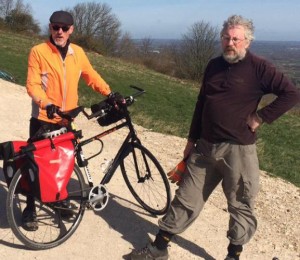 Estate agent Paul Bonett and his friend Jim Stevenson are cycling from North Ronaldsay in the Orkney Islands, through Scotland and England, playing golf on alternate days, to raise funds for Brighton Housing Trust’s First Base Day Centre for homeless men and women.

Paul and Jim will arrive back in Brighton on June 18 before setting off again on June 19 with other cyclists supporting First Base, to cycle to Paris in 24 hours.

“Along the way we will be playing eight rounds of charity golf and I will be teaching aikido classes, raising money for First Base.”

Paul is writing a blog of their journey and donations can be made at www.justgiving.com/Paul-Bonett2 or by texting PBON15 £10 to 70070.

BHT chief executive, Andy Winter, said: “We have many people supporting our work in many and varied ways, but this epic challenge tops the lot.

“Cycling that distance is one thing, but playing golf and teaching aikido classes along the way is something else.

“Paul and Jim are hoping to raise £10,000 to help the work of First Base. The day centre helps men and women who are sleeping on the streets with essential life saving services as well as helping them into accommodation, training and, ultimately, work.

“Between April 2014 and March 2015, First Base worked with 897 men and women, the majority of whom had slept the previous night on the streets.

“There were 15,057 individual visits to the rough sleepers service provided by First Base, and 323 individuals were helped into accommodation.

“We could not continue to provide the services we do without the support of the public and amazing efforts from people like Paul Bonett and Jim Stevenson.”