The Umi Hotel on Brighton seafront was evacuated while firefighters tackled a fifth floor fire which spread to the attic this afternoon, leading to delays along the coast road. 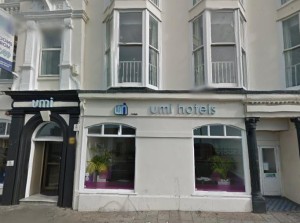 Four crews rushed to the Kings Road hotel after an alarm was triggered by the smell of burning coming from a small electrical fire in a bedroom.

The crews from Preston Circus and Hove, along with the aerial ladder platform, were at the scene from shortly after 2pm for about an hour.

A spokeswoman for East Sussex Fire and Rescue said: “Crews have extinguished a fire at a Brighton hotel, which spread from the fifth floor into the attic space.

“Visitors were being evacuated by hotel staff when crews arrived from Preston Circus and Hove, who assisted.

“The stop message came back at 2.50pm and crews remained at the scene until 3.06pm, after spending time cutting away and ensuring that the fire was out.

“There were no injuries and everyone was safely evacuated.

A spokesman for Sussex Police: “At 2.05pm police were informed that the fire service was attending a fifth floor fire at the Umi Hotel on the A259 Kings Road, Brighton.

“Four pumps were being deployed and the building was being evacuated. Heavy traffic congestion was reported and diversions were set up, but Kings Road was re-opened by 3pm.”

The alarm was triggered on the fifth floor of the Kings Road budget hotel.

“The hotel was fully evacuated without any persons being injured.  We apologise for any inconvenience caused to the local area.”

Delays to services in West St due to the fire service checking a building. We have been advised it will take too long. — B&H Buses (@BrightonHoveBus) June 2, 2015