Fire investigators are looking at the possibility that an arsonist struck twice in a matter of minutes at the British Engineerium and at Waitrose in Hove yesterday evening (Thursday 11 June).

One of the most senior officers in East Sussex Fire and Rescue Service said last night: “Both fires are under investigation and at this stage we’re treating them as suspicious.”

Lives were at risk as firefighters tackled a fire in a loading bay at Waitrose, in Nevill Road, Hove, and in a storage shed on the neighbouring Engineerium site, in The Droveway. 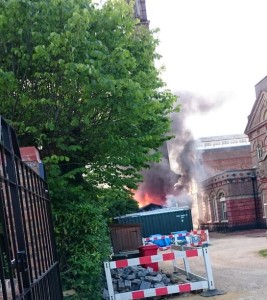 The blaze at the Engineerium

“So we withdrew and put remote unmanned monitors from two directions on to the fire until we could establish the nature of the cylinders.”

Had the cylinders contained acetylene, the risk of explosion would have been greater. A wider safety cordon would have to have been established and a more defensive approach taken to tackling the fire. This could have meant more damage, including to the historic Engineerium building.

Mr Elder said: “The cylinders were cooled to the point that it was safe for us to extinguish the rest of the fire and check the main building for unseen fire spread.” 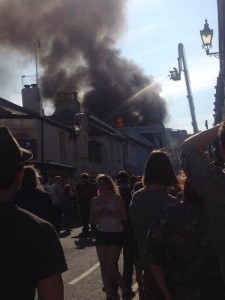 Fire and smoke at the Argus Lofts in Brighton

There were no casualties and the last firefighters left the scene about three hours after arriving.

Fire investigators are also examining the rooftop scene of the fire at the Argus Lofts, in Gloucester Road, Brighton, yesterday evening.

It is believed that work had been taking place before the fire started although it was not clear last night whether it had anything to do with the cause of the blaze.

Thirty years ago an older part of the same building caught fire when it was the office of the Argus newspaper – then known as the Evening Argus.

Despite the blaze, the newspaper still managed to publish, albeit a limited edition, with its own news making the front page.