A Brighton primary school has gone from special measures to good within two years, according to Ofsted.

The watchdog published its latest report this morning (Friday 10 July) rating City Academy Whitehawk as good. This is the second best of the four ratings used by Ofsted.

The school opened in September 2013 in place of Whitehawk Primary School which had been placed in special measures after being rated inadequate.

Students, staff, parents and supporters celebrated the news in the sunshine this morning, with head teacher David Williams paying tribute to the team effort that has helped the school improve so fast. 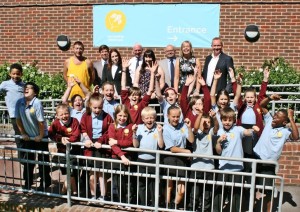 Mr Williams received congratulations from Brighton Kemptown MP Simon Kirby, the Duke of York – who’s office hosted a trip by pupils to Buckingham Palace – and Charlie Taylor, the chief executive of the National College for Teaching and Learning.

Mr Williams said: “From the outset, our vision for pupils was to create an ambition to be ‘great by choice’.

“Due to the incredible commitment of all our staff and the efforts and support of children, their families and the whole community we have achieved this.

“I’m hugely proud of the culture we’ve created at the academy.”

He praised the partnerships with the academy’s sponsor, City College Brighton and Hove, and with the Fonthill Foundation, which provided iPads for every child, teacher and teaching assistant.

The foundation, which is chaired by Andrew Goodall, the managing director of Brunswick Developments, also set up a learning adventure centre for the children at Brighton Marina.

City College students and staff have worked with the academy on a go-kart project for 30 children and the “Raising Aspirations” careers fair among other things.

Mr Williams said: “I think we’ve been able to nurture a really positive environment for the children where they feel valued, safe, appreciated and rewarded for their achievements.

“I believe that City Academy Whitehawk provides a great start to a young person’s education and helps create aspiration to learn and achieve more in the future.”

One of the parents, Nicola-Jayne Coonan, said that, when she moved to the area, some people told her not to send her son to the school.

But she went to see it for herself and said that he had thrived there and she would recommend the school to anyone.

Other parents – incuding Dave Bailey and Tiffany Lawrence – spoke equally supportively. And Stephen Dawson, the chair of governors and also a parent with children at the school, said that the challenge now was to aim to be outstanding.

He and Mr Williams highlighted the improvement in achievement, with 75 per cent of Year 6 children this year achieving level 4 in English, maths and science. Two years ago the figure was 39 per cent.

Councillor Warren Morgan, the leader of Brighton and Hove City Council, congratulated the school. He is one of the three ward councillors for East Brighton, which includes Whitehawk, and he previously served as a governor.

He said: “This is a magnificent effort from a school that has had a difficult time in recent years.

“Head teacher David Williams and his team deserve the highest possible praise for all the hard work they’ve put into achieving this.

“I’d also like to pay tribute to City College for all the work they have put in as sponsor of the academy to make this happen.

“The council’s education team works in close partnership with all the state schools in the city, regardless of their governance, to drive up standards – and we also bring schools together to share best practice.

“Whitehawk is one of the city’s most disadvantaged areas and this success is a reminder that economic disadvantage should not be seen as a barrier to academic success.”

Mr Kirby said: “This is a truly great achievement and I would like to congratulate all the staff and pupils at City Academy for their hard work.”

Ofsted said: “This is a good school. School leaders at all levels, as well as the governors, are strongly committed to providing the best possible education for pupils. They have successfully shared this ambition with staff.

“Pupils throughout the school make good progress from their starting points in a range of subjects, including reading, writing and mathematics.

“The school looks after its pupils well. As a result, they feel safe and secure and have few concerns about bullying.

“Pupils understand the importance of behaving well. Their good behaviour makes a positive contribution to their learning and progress.

“Teachers have developed a good understanding of pupils’ different abilities. This enables them to give pupils work which is mostly well suited to their needs.

“Pupils benefit from a broad curriculum, including a variety of visits and out-of-school activities. This makes a strong contribution to their achievement and to their understanding of the wider world.

“The school makes extremely good use of the extra funding it receives to promote sport and physical activity. This has resulted in higher participation in sporting activities and has enhanced pupils’ social development.

“Governors have a secure understanding of how well pupils are achieving. They know what leaders have done to improve teaching and challenge them to ensure that high targets are set and reached.

“Children in the Reception class make good progress in their learning and social development. This is because of consistently good teaching in a well-organised, stimulating and secure environment.

“Parents comment very favourably on the new school’s improvement since it opened and most say they would recommend it to others.

“It is not yet an outstanding school because leaders have not yet ensured that the quality of teaching is high enough to result in outstanding achievement for pupils.

“Teachers do not always adapt activities during the course of lessons to ensure that pupils work as hard as they could and make sustained progress.

“Teachers’ marking of pupils’ work does not always include detailed enough advice about how pupils can improve their work.”