A Brighton bus has crashed into a parked car, causing a domino effect crash into two more cars this evening. 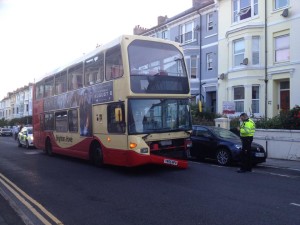 Sussex Police were called to the collision in Queen’s Park Road at 8.10pm this evening, after the bus travelling towards Elm Grove came a cropper close to the junction with Richmond Street.

A police spokeswoman said there were no reports of any injuries, and traffic is still flowing around the stationary bus.  It is not known whether anyone was on board.

Gigi Yoshieque who took this picture said: “The bus hit a parked car which domino’d into three other cars. No one was hurt, by the looks of it, and the police are on the scene.”

A spokeswoman for Brighton and Hove Buses said: “This incident is currently under investigation.”

The crash comes two weeks after another bus crashed into the back of another bus by the Clock Tower in Brighton city centre, seriously injuring five people, including the driver.