A homeless man was left with life-threatening injuries after being attacked in the early hours of Sunday morning. 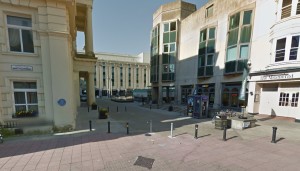 Bartholomew Square was cordoned off after the attack on the 30-year-old manat about 4.30am on Sunday at the rear of the Waterfront (Thistle) Hotel in Kings Road.

Police believe the savage assault followed a verbal row with three men, who then went off in the direction of the Mesmerist.

A police spokesman said: “The incident took place on one of Brighton’s busiest nights of the year with annual Pride celebrations going on around the city, but it is not known if the incident involved Pride revellers.”

The man was taken to Royal Sussex County Hospital where he underwent surgery and is still being treated. Police enquiries and forensic tests continue.

Anyone who saw what happened or who may have other information is asked to email 101@sussex.pnn.police.uk or phone 101, quoting serial 220 of 2/8.

Alternatively they can call the independent charity Crimestoppers without having to leave their name on 0800 555 111.