Police are appealing for witnesses to a robbery in which a man was threatened with a knife in De Montfort Road, Brighton. 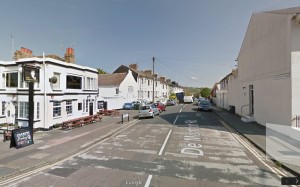 It happened at around 8.45pm on Monday when the man, who is in his late 30s. was walking home alone after an evening out with friends.

He was accosted by another man who produced a knife and ordered him to hand over his money. There was a scuffle and the victim fell to the ground.

He sustained a small cut to his neck but was otherwise unhurt. His attacker fled and is believed to have stolen the victim’s black iPhone 5.

The suspect is described as a white man, aged late 20s – early 30s, 5ft 8in to 5ft 9in, of slim build build and with short brown hair.

He was wearing denim jeans or shorts, a dark T-shirt and carrying a distinctive blue rucksack. He had a noticeable Liverpool accent.

Anyone who saw what happened or who may have other information is asked to email 101@sussex.pnn.police.uk or phone 101, quoting serial 1500 of 10/8.

Alternatively, they can call call the independent charity Crimestoppers without having to leave their name on 0800 555 111.