Three bus passengers have been taken to hospital after a bus and a car crashed in Rottingdean this afternoon. 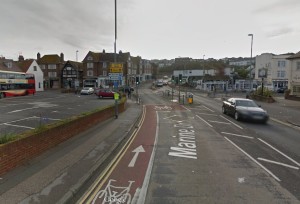 The crash happened at 3.55pm at the junction of the A259 South Coast Road and Rottingdean High Street.

A police spokesperson said: “Three passengers on the bus sustained minor injuries and two of them were taken to the Royal Sussex County Hospital for purely precautionary check-ups. Traffic was flowing again 30 minutes later.”

Martin Harris, managing director of Brighton and Hove Buses, said an investigation into the crash was underway.

He said: “We can confirm an incident took place involving one of our buses and another vehicle this afternoon on the A259 Eastbound in Rottingdean.

“The police and ambulance services have attended the scene and are providing support to those involved in the incident.

“This is a serious incident, the details of which are still under investigation.”