A Brighton man has been jailed for his part in a million-pound internet fraud.

Ross Faulkes, 26, of Preston Park Avenue, Brighton, was one of three men who fraudulently bought internet airtime to sell to people overseas. He blew the proceeds of the fraud on fast cars and wild living. 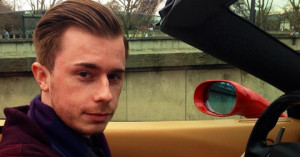 His sentence was handed down a week after Mark Thompson, 59, from Worthing, was jailed for four years, and David Robinson, 35, from Bournemouth, for five years.

The three men were convicted in June of fraud by false representation and conspiracy to defraud after an investigation by the City of London Police Fraud Squad.

Detectives uncovered how they purchased the voice over internet protocol (VoIP) airtime from British Telecom (BT), Wavecrest and the Exclusive Group on credit. They then sold it abroad using a hijacked company identity known as Cadcorp.

The VoIP was then used by their clients to make internet-based calls from the UK to Zimbabwe and countries in the Middle East. Thompson, Robinson and Faulkes used their own engineer to make the source of the calls untraceable.

The bill for the internet calling credit was never settled with BT, Wavecrest and the Exclusive Group, with the three men blowing much of the million pounds.

Faulkes in particular spent to excess on Porsches and a lavish lifestyle of expensive hotels and restaurants.

The fraud was reported by BT in January 2012 and City of London Police carried out an investigation with help from Sussex Police.

Thompson, Robinson and Faulkes were arrested in December 2012 at their respective homes by detectives.

Directly after his arrest Robinson fled overseas and is currently believed to be in Thailand. He was sentenced in his absence.

Detective Sergeant Nick Kemsley, who led the investigation for the City of London Police, said: “Thompson, Robinson and Faulkes believed they had created a highly technical and untraceable scam that would enable them to spend a million pounds of another company’s money without ever paying it back.

“Unfortunately for these three men, the City of London Police specialises in investigating complex cases of fraud and has an excellent record of delivering successful prosecutions.

“Thompson, Robinson and Faulkes can now be added to the ever lengthening list of fraudsters who convinced themselves that they were too smart to be caught and have now ended up with a jail term.”

BT executive Kevin Brown said: “This is an example of a complicated fraud committed against BT by an organised gang of criminals.

“BT will always rigorously pursue those who attempt to defraud BT and will assist and support the police in order to do so.

“It will take all possible steps to recover losses resulting from criminal acts committed against it, using relevant legislation to seek compensation from those involved.”