The family of a grandfather it is believed was killed in the Shoreham Airshow crash has paid tribute to the “gentle, loving, incredibly giving family man”. 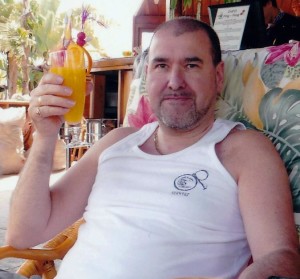 Mark Reeves’ family believe he died while taking pictures of the planes after parking his motorbike along the A27, close to where the Hawker Hunter crashed on Saturday afternoon.

In a tribute released via Sussex Police this morning, they said: “Mark Reeves – motorbiker, golfer, photographer, fund-raiser – but above all else, son, brother, husband, father and grandfather.

“Mark, who was 53, died while he was combining two of his favourite hobbies having ridden his cherished Honda motorbike to Shoreham to photograph the planes at the airshow. As many times before he had travelled to an airshow and parked up on the outskirts to grab the best photos, but he had never been to the Shoreham Airshow before.

“We will remember him as a gentle, loving, incredibly giving family man, husband to Wendy, father to Luke, granddad to three beautiful grand-daughters, brother to Denise and loving son of Ann and Kenneth.

“With his family he moved to Seaford nine years ago, drawn by our love of the sea and for Mark in particular, love of the sun. He was a sun worshipper and an enthusiastic holidaymaker, travelling to Fuerteventura and Madeira in recent years and would often be seen relaxing with a cocktail in hand.

“He worked as a CAD technician in West London and lived life to the full, parachuting and abseiling for cancer charities and also having a go at para-gliding and gliding.

“He will be missed by so many, not least the doctors and staff at the Seaford medical practice where Wendy works, who, like everyone who met Mark, were touched by his generosity, caring nature and overwhelmingly genuine, caring nature.

“We thank everyone who has sent their love, condolences and prayers and while we appreciate that many others will be experiencing similar unspeakable grief in such tragic and public circumstances, that we now be allowed to grieve ourselves in private and in peace.”