Hopes have been raised that the Preston Park Cycle Track in Brighton can be saved.

A report published today (Wednesday 9 September) outlined a plan to raise £285,000 to upgrade the track so that it meets the sport’s safety standards for racing.

British Cycling – the sport’s governing body – is expected to give a grant of £185,000 towards the cost while Brighton and Hove City Council will put in £100,000.

The council will use money paid to it by a property developer to turn the old London Road Co-op into student flats. 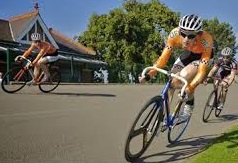 The cash – known as section 106 money – has to be used for “improving amenity green space, parks and gardens, natural and semi-natural land or outdoor sport facilities”.

The details set out in the report which was published today follow a petition signed by thousands of people and presented to the council in March.

The report is due to be discussed by the council’s Economic Development and Culture Committee at the Jubilee Library in Brighton on Thursday 17 September. The meeting is open to the public.

It said: “Preston Park Cycle Track has been deemed unsafe to host cycle racing following a risk assessment by British Cycling, the governing body for the sport.

“The main concern relates to the condition of the fencing surrounding the track.

“A petition was presented … requesting that the council bring the cycle track up to racing standard.”

The petition asked for the council-owned track to made safe and added: “We would also like to see investment in this facility to help make it the centre of excellence for cycling it could be for our area.

“The oldest outdoor cycle track in the country is in danger of being lost due to lack of investment and care.

“Preston Park Cycle Track has loads of potential for open cycling events which can draw in the crowds from afar if looked after properly.”

The council noted that cycling was growing in popularity – and just a few years ago Brighton and Hove was a cycling demonstration town, committed to encouraging people to get on their bikes.

While it is not guaranteed that British Cycling will stump up the cash, the report said: “British Cycling has indicated it would look favourably on an application from the council.”

If the money is forthcoming the work is likely to be completed within 18 months.

Hopes that the track might be relaid – which would cost almost £900,000 – are likely to be dashed at this stage.

The cycling clubs that use the track – Preston Park Youth Cycle Club, British Cycling Breeze and the Brighton Tri Club – will still have to share the arena with St Peter’s Cricket Club.

The Sussex Cycle Racing League is not currently using the velodrome for racing but could return once the perimeter fencing is replaced.