Which Labour leadership candidate was the most popular in Google searches in Brighton and Hove?

The most popular Labour leadership candidate in Brighton and Hove in terms of Google searches is Jeremy Corbyn.

He topped the searches in the three parliamentary constituencies – Hove, Brighton Pavilion and Brighton Kemptown.

The finding came to light in research carried out by Google News Labs and Alasdair Rae of Sheffield University for the BBC. 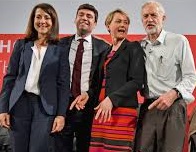 And today the BBC published the findings in a map of the country showing that Mr Corbyn topped the search rankings in 539 of the 650 parliamentary constituencies. The searches were made from the start of June until last Thursday (3 September).

It came with the rider that searches are not necessarily an indicator of popularity although Mr Corbyn is the runaway favourite, according to every high street bookmaker.

And of course the searches will not have been carried out only by Labour supporters.

Hove MP Peter Kyle and Brighton and Hove City Council leader Warren Morgan have both given their backing to the outsider Liz Kendall. She is widely regarded as a Blairite.

Voting closes at noon tomorrow (Thursday 10 September). The result is due to be declared late on Saturday morning (12 September) at a special conference at the Queen Elizabeth II Conference Centre in Westminster.