A charity furniture shop is to open early next year in the final unit of the old London Road Co Op to be let – spelling an end to Wetherspoon’s ambitions to open a London Road pub for the foreseeable future. 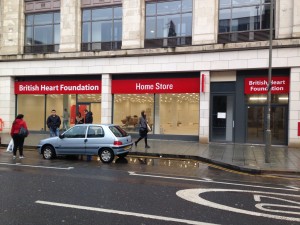 The British Heart Foundation plans to open its first furniture and electrical store in Brighton in the former department store on January 12.

The unit had been the subject of a planning application by the pub chain which was refused after hundreds of people complained.

Wetherspoons spokesman Eddie Gershon said: “We’ve got a number of pubs in Brighton and Hove. We were wanting to open a pub in London Road, but that never happened so we moved on.

“We would be interested in other sites in the town, but we’re not looking at anywhere at the moment.”

One of those who led what he described as “the mother of all battles” against the pub’s plans was Brighton Housing Trust chief executive Andy Winter, who feared the impact a pub selling cheap booze would have on the area.

He said: “I’m delighted that British Heart Foundation, a charity that I have a huge amount of admiration for, is expanding their outlet in London Road.

“We needed a retail frontage, and that’s what we’re getting.”