A Brighton man who has done up his jeep to look like the one in Jurassic Park was devastated when he discovered that someone had stolen a dinosaur statue which stood in the back.

Ben Kornitzer, who runs Southover Wines in Hanover outside which the jeep is often parked, is pleading for the safe return of the 2ft T Rex. 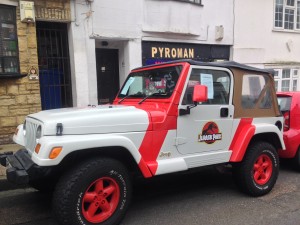 Ben Kornitzer said: “If anyone knows of who did it please tell me. I will not press charges. I mainly want it back due to the joy it brings for the children of Hanover.”

He has also put a sign on the jeep, explaining that he built it for children’s charity events, and that he does not have enough money to replace it. 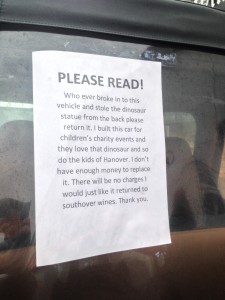 Ben, who has a long-standing love of dinosaurs, lovingly recreated the jeep over the course of several weeks, only finishing it last month, so it was especially disappointing when the T Rex was taken in the early hours of Monday morning.

But although the dinosaur has not yet been returned, his appeal has prompted one woman to make him a replacement.

Toxi Doyle, who saw a post Ben put on the FacebookHanover Community Noticeboard, has made a replacement papier mache dinosaur which she intends to give to Ben once the finishing touches have been made.

She said: “I thought I might as well try make a replacement for Ben. It may not be as cool as what he had but anything I can do to help.” 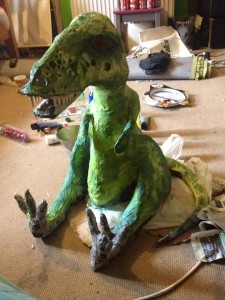