Two drivers from Brighton and Hove have been fined thousands of pounds after being caught using disabled blue badges belonging to people who had since passed away. 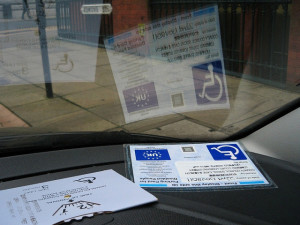 Lee Doe and Paul Stuart were among five drivers caught be Brighton and Hove City Council and taken to court on Friday.

The five were ordered to pay fines and costs totalling £5,635 for using the badges which did not belong to them.

Deputy council leader Gill Mitchell said: “These prosecutions send out a clear message that blue badge misuse is being addressed in the city.

“We will continue to work with Sussex Police and East Sussex County Council to crackdown on misuse of blue badges and ensure that people with disabilities can get to and enjoy everything Brighton and Hove has to offer.”

Shannon Casey, of Golf Course Lane, Leicester, pleaded guilty to blue badge abuse and was ordered to pay a fine and costs totalling £1,315, after being found displaying an out of date blue badge, which had been cancelled two years previously after being reported stolen.

Barry Cook, of Imperial Court, Nantwich, Cheshire, attended court and pleaded guilty and was ordered to pay a fine and costs totalling £645. Len Batten, prosecuting on behalf of the city council, said the blue badge was being misused – it was out of date, and the expiry date had been tampered with to show June 2018 instead of June 2015. The case came to light after an eagle eyed Civil Enforcement Officer noticed the unauthorised amendment.

Lee Doe of Downsview Avenue, Brighton, did not attend court and the case was proved in his absence and he was ordered to pay a total of £1,315 in fine and costs. Magistrates were told that his vehicle was seen on 13 occasions displaying a blue badge issued to someone who had since died.

Kelly Griffiths of The Broadway, Brighton, pleaded guilty and was ordered to pay a total of £660, after being found using a disabled badge while the badge holder was not present. The badge was also out of date.

Paul Stuart, of The Drive, Hove, did not attend court, the case was proved in his absence and he was ordered to pay a fine and costs totalling £1,700. Magistrates were told he was found using a cancelled blue badge that had been issued to someone who had died in 2013.

The cases were all heard on Friday at Eastbourne Magistrates’ Court.