A Brighton charity has helped fund a specialist “trauma room” in the Accident and Emergency (A&E) Department at the Royal Alexandra Children’s Hospital.

The trauma room opened just over a week before Christmas thanks to the support of the Rockinghorse sick children’s charity.

The addition of the trauma room in the Children’s Emergency Department allows patients to receive non-surgical treatment. 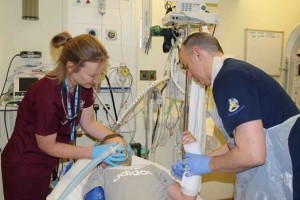 Before it opened, children who had suffered a traumatic injury were required to undergo a general anaesthetic and an overnight stay in hospital.

But the installation of a medical gas scavenger system in the trauma room means that young patients can now be treated without anaesthetic.

It also enables A&E staff to use the new pain relief system to treat serious injuries such as broken bones that need resetting, deep wounds that need stitches and burns and dislocations.

The experience is much less distressing to young patients and their families.

The trauma room is expected to relieve the strain on theatres by drastically reducing the number of procedures.

Michaela Lazner, consultant emergency paediatrician at the Alex who helped implement the unit, said: “The new trauma room and its equipment will be an invaluable tool to help us treat injured children as painlessly as possible and improve their hospital experience.”

Dr Lazner added: “Using the equipment, we hope to be able to avoid many children requiring a general anaesthetic for treatment of their injuries.

“This will mean their treatment can be completed in one visit to A&E, freeing up valuable operating time for other urgent cases.” 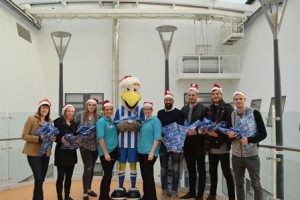 Over 25,000 children attend the Children’s Emergency Department each year and this figure continues to rise.

In November the A&E service had its busiest month of the year so far with 2,349 attendances.

A recent report revealed that the department had met 99.9 per cent of its waiting time targets within the government’s current standard – an outstanding feat for the staff.

As the official fundraising arm of the Alex, Rockinghorse helped fund the dedicated children’s A&E which opened in January 2012.

Since then, the charity has funded a number of key projects for the department, including a 3D pain distraction unit, a sensory room for patients with additional needs and a play room.

To find out more about the charity, visit www.rockinghorse.org.uk.

Members of first teams of both the men and women’s sides, together with some coaching staff, handed out presents that they had bought and wrapped.