250 Brighton and Hove employers now signed up for Living Wage

The Brighton and Hove Living Wage Campaign has just signed up its 250th member, a Hove bakery which will join a wide range of organisations paying its staff at least £8.25 an hour. 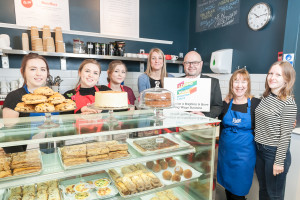 Brighton Chamber has run the Brighton and Hove Living Wage Campaign for four years, looking at the business benefits of paying a Living Wage, and encouraging businesses to join the local campaign.

Raise Bakery is the 250th business to sign up. They are an independently, family run business with a retail shop based in Hove and a bakery in Worthing, specialising in baked goods, sweet treats and desserts. With a team of 9 staff, Raise believes that paying a higher wage ensures maximum efficiency.

Jeremy Jacobs, Managing Director of Raise, said: “We’re very pleased to find out Raise Bakery is the 250th company in Brighton and Hove to sign up to the scheme.

“It’s important that the companies that are paying a fair wage are recognised, as it can help encourage other companies to follow suit. Being a born and bred Brightonian myself it’s wonderful to see another forward thinking scheme that goes to show how great the city is.”

Launched in 2012, the Brighton and Hove Living Wage Campaign aims to encourage local businesses to voluntarily pay all employees at least the Living Wage rate which is currently £8.25 per hour in the UK (apprentices and interns are exempt).

Set independently and updated annually, the Living Wage is calculated according to the basic cost of living in the UK and is the amount required for people to live a decent life, rather than just survive.

Council leader Warren Morgan said: “This is a landmark in the Living Wage campaign, one we are committed to working with businesses on. Paying the Living Wage makes sense for business and is good for the city. We all need to support a local economy where people have money to spend and a city where people can afford to live.”