Police said that they were growing concerned for a missing woman, Sinead Matthews, who was last seen in Hove.

Sussex Police said: “Sinead, 25, is from the London area but was last seen on Christmas Eve in Hove where she had been staying.

“She had an appointment in Brighton on (Wednesday) 30 December which she didn’t turn up for and she was reported missing. 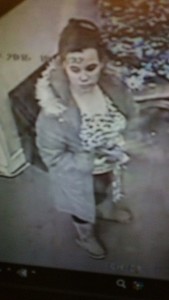 “Sinead is from the travelling community and it was believed she may have returned to London.

“However, she has not been in contact with anyone and has not rearranged her appointment.

“Inquiries have been ongoing, however, as Sinead leads a lifestyle where she is not permanently based in one place she has not been located.”

Detective Inspector Julie Wakeford said: “We are concerned about Sinead as she is four months’ pregnant and has learning difficulties which means she struggles with reading and writing.

“We are working with our colleagues in the Metropolitan Police to try to locate her.

“We have CCTV image of Sinead leaving where she was staying in Somerhill Road in Hove.

“She is described as white and was seen wearing a green coat with a fur hood with black and white spotted leggings and brown boots.”