Police are appealing for witnesses who filmed an assault on a man in Brighton on Saturday (January 23) to contact them if they still have the video or any still images they may have captured. 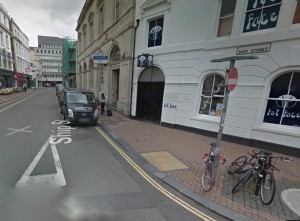 A 24-year-old man from Hove suffered serious injuries to his face, which will result in permanent scarring, in the incident outside Fatface in Ship Street between 1.45 and 2am.

Anyone with images or information is asked to email 101@sussex.pnn.police.uk or call 101 quoting serial 141 of 23/01. Please do not attach the video or images initially – you will be contacted with instructions on how to provide them.

Asa Smallwood, 22, a gas fitter of Woodbourne Avenue, Brighton, was charged with grievous bodily harm with intent and assault by beating. He appeared at Brighton Magistrates’ Court on Monday (January 25) where he was remanded in custody until February 22.

A 16-year-old schoolboy from Brighton was arrested on suspicion of grievous bodily harm and possessing an offensive weapon in a public place. He was bailed to March 3 on the first offence, but released without charge on the second.

A 21-year-old man from Portslade was arrested on suspicion of grievous bodily harm with intent. He was bailed to January 28.