Planners have rejected a scheme to build 32 homes on a three-acre site on the edge of Brighton. 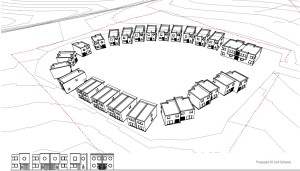 The housing association Hyde, which submitted the plans, is considering whether to appeal against the decision by members of Brighton and Hove City Council.

But nine of the twelve members of the council’s Planning Committee agreed with those who spoke out against the scheme this afternoon (Wednesday 27 January).

They turned down the plans, saying that the design is out of keeping with the urban fringe area.

They also said that the style and material were out of keeping with the surrounding area – and to the detriment of the area.

Hyde said that it had originally proposed different materials but had changed to the render design after public consultation and advice from council planning officials.

The housing association wants to demolish the existing house and stables and build four two-bedroom flats as 28 houses with a mix of two, three and four bedrooms.

Councillor Lee Wares said: “I went on the site visit yesterday and got soaking wet in the rain and blown about in the wind.

“All the properties in that area were probably chalet-style bungalows. We need homes … that doesn’t mean we should accept anything that’s put on the table.”

He said that developers needed to work with planners and produce plans that are in keeping with the area.

His statement was applauded by dozens of people in the public seating at the meeting at Portslade Town Hall. They were among almost 300 objectors to the proposals.

Hyde development director Tom Shaw addressed the committee. He quoted from a statement about the plans that said: “The application before the committee today is the culmination of over 10,000 hours of work by a wide range of professionals.

“The design of the scheme has been subject to extensive consultation with local residents, councillors and other stakeholders and has been amended to reflect and take account of local concerns.

“From an initial density of 48 homes, the scheme has been reduced to 36 and subsequently the 32 mainly family homes before the committee today.

“A wide range of concerns have been put forward by local residents, some of whom have said that they would prefer to see no development taking place in Saltdean at all.

“The reality is that Brighton and Hove needs new homes to be built, there is a housing shortage and by the council’s own assessment, land for 30,000 homes is required between now and 2030.

“The council’s own land studies suggest that brownfield land is only able to accommodate around 12,000 of these homes.

“It is further noted that the city does not have a five-year supply of housing land as required by government policy.

“The housing shortage in the city is manifesting in above average house price and rent increases outstripping growth in local incomes.

“Rents in the city rose by 18 per cent last year, far in excess of wages, with up to two thirds of local wages spent on rent.

“Home ownership for many local people remains a distant dream with house prices rising approximately 10 per cent in 2015.

“Delivery of new homes for local people is therefore a pressing issue for the council.

“This application would provide 32 mainly family homes, with 40 per cent of the homes to be rented or sold at discounted prices to local people.
“This is to be secured via a legal agreement to be entered into by Hyde with the council.

“The majority of development coming forward in Brighton and Hove provides only for apartments without gardens, and potentially not meeting the needs of families in the city.

“The application takes into account the impact of the development on local infrastructure, with approximately £11,750 per home required to be paid to the council to fund increases in the capacity of local schools, the highway network and public open space – approximately £375,000 in total.

“We have already experienced high demand from local people for what will be attractive and high quality family homes, with gardens and car parking, from local families interested in both renting and buying in Saltdean if the planning permission is granted.

“Hyde is not a land trader or speculator we are a constructor and provider of new homes, with a track record of delivery.

“While we respect local concerns about new development we feel strongly that the application will provide high-quality new homes and jobs for local people in a way which does not cause harm to existing residents or to the national park.”