Beach huts, trees and fences hit by Storm Katie, but no serious injuries 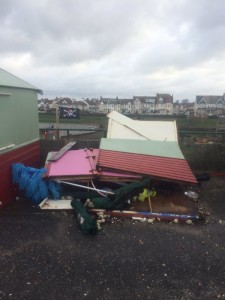 The emergency services have received hundreds of calls as a result of the wind, but fortunately there are no reports of serious injuries.

East Sussex Fire and Rescue Service attended several incidents in Brighton and Hove, including shoring up a dangerous sash window in Kingsway, Hove, securing a canopy in Ridgeside Avenue, Brighton, making scaffolding safe in Montpelier Road – and chasing down a trampoline which was blowing down Beaconsfield Villas in Brighton at 6.37am. 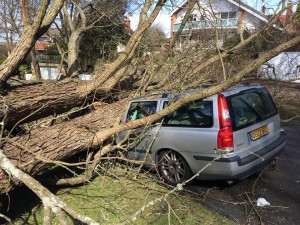 A spokesperson said: “Storm Katie caused a large number of weather related incidents for East Sussex Fire and Rescue Service in the early hours of 28 March 2016.

“Members of the public are asked to take extra care as high winds are expected to continue throughout today.”

At least two beach huts on Hove seafront have been destroyed by the 70mph winds, and trees are down across the city – we have reports of fallen trees in Upper Lewes Road, Preston Drove, Stamford Avenue, Surrenden Crescent and Ditchling Road.

And trains are disrupted, with trees on the line at Balcombe, Littlehampton and Bognor causing delays.

Duty Command for @sussex_police & 100’s of weather related calls overnight, most regarding trees. No serious injury to any person thankfully

A picture taken late last night appears to show the i360 bending in the high winds:

Is it me or is the i360 bending? #StormKatie #Brighton pic.twitter.com/nEuBulKbpT

Another tree gone in #brighton. A few starting to come down now. #StormKatie #PrestonDrove pic.twitter.com/EXrzCCdnMQ

It’s been a bit windy in #Brighton. pic.twitter.com/YfLxuk2icw 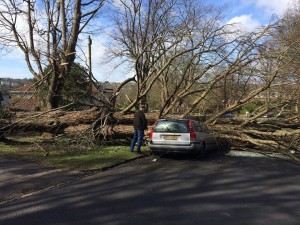 Brighton and Hove noise patrol to return from next month

Missing man may be in Brighton