Car ends up on roof after late night crash

A car ended up on its roof after crashing into parked cars in Brighton in the early hours of this morning. 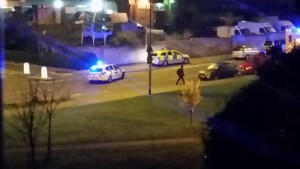 A student has been charged with drink driving and other motoring offences and will appear in court next week.

The car flipped over on Davey Drive and emergency services were called to reports that people were trapped inside at 2.20am.

East Sussex Fire and Rescue sent two fire engines from Preston Circus to the scene. They found the car upside down, but nobody was trapped inside.

A fire service spokesman said: “On arrival crews confirmed that the vehicle was on its roof, no one was trapped. Crews made the vehicle safe before leaving the scene at 2.37am.”

A police spokesman said: “At 2.20am on Thursday (14 April) emergency services attended the scene of a crash at the junction of Davey Drive and Upper Hollingdean Road, Brighton, involving an Audi A1 and two parked cars

“The Audi rolled onto its side and the driver had to be released. He escaped injury.”

Student Macallan Griffiths, 19, of Bear Road, Brighton, was arrested and subsequently charged with driving without due care, driving with excess alcohol and driving without insurance. He has been bailed to appear before magistrates on Thursday 28 April.