Albion handed out a thrashing to a second west London team in four days as they swept aside Queen’s Park Rangers.

The game started in a similar vein to Fulham last Friday (15 April) although QPR had far more chances than the Cottagers had to score.

Bruno Saltor looked out of sorts for Albion and early errors presented chances for the visitors.

Conner Washington was able to turn on the edge of the six-yard box but fired his shot over.

Albion were being overrun in midfield and after another Bruno miscalculation Junior Hoilett forced an excellent one-handed save from David Stockdale.

Matt Philips found himself well placed for QPR but fired his shot over the bar.

Albion began to edge their way back into it. A combination of James Wilson and Tomer Hemed set Anthony Knockaert up. But the Frenchman allowed the ball to hit the top of his head and it bounced well over.

Soon after, Lewis Dunk saw a bullet header pushed away by Alex Smithies in the QPR goal – it looked like Albion were going to be frustrated.

Then on the stroke of half time, the Seagulls were awarded a free kick around 20 yards out. Both Jiri Skalak and Knockaert stood over the ball but it was the little Frenchman who curled it into the corner and past Smithies inside the right hand post to put Albion in front.

The second half looked like being a cagey affair until Beram Kayal launched a ball forward. Nedum Onuoha headed it away and the loose ball fell to Skalak. What happened next was one of the greatest moments in the short history of the Amex.

Skalak met the loose ball with a half volley and his shot from fully 25 yards flew past Smithies with such pace it almost hit him as it rebounded back out of the net. 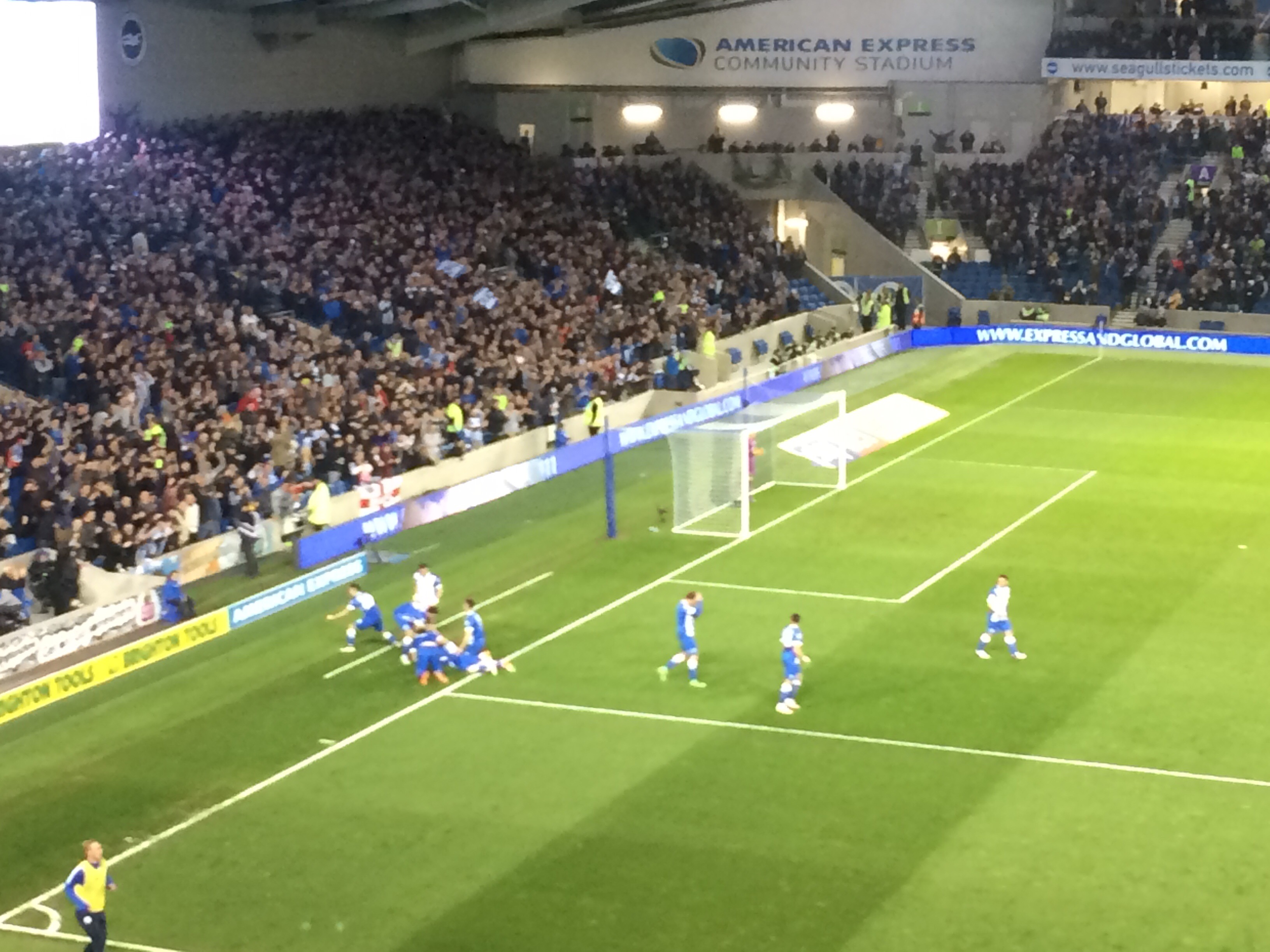 Possibly Albion’s goal of the season. Of any season. Skalak’s first for Albion and in English football. 2-0

The Seagulls then really got their tails up and threw everything at Rangers.

Just after the 70-minute mark, Knockaert was able to fire in another perfectly placed corner and Goldson rose highest and almost hung in the air to head his second of the season and his first at the Amex.

At this point Middlesbrough were beating Burnley at Turf Moor.

Steve Sidwell replaced Skalak as Albion looked to close the game out.

It was Sidwell’s knockdown that presented Knockaert with his second and Albion’s fourth as he swiped a half volley past Smithies. Sam Baldock, on as a sub, looked to be offside as he tried to get out of the way. But, like Hemed’s hat-trick goal last Friday, the effort stood.

Burnley and Boro drew, with Burnley scoring yet another injury time equaliser.

Albion are now level on points with the Clarets and two behind Boro with three games to play.

The club now has arguably its three most important games in 37 years, starting with the now-relegated Charlton at the Valley on Saturday (23 April).

It’s simple: win all three and the Albion will be promoted to the Premier League.