The owner of a cafe ransacked by burglars last weekend says the way the neighbourhood has rallied round has turned it around from a tragedy to a triumph of community spirit. 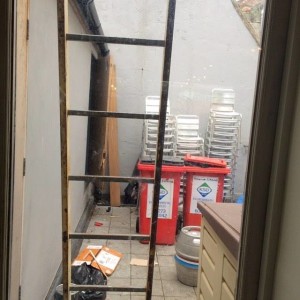 John Easterby’s heart sank when he opened up The Verdict in Edward Street on Monday morning to find doors and fittings smashed, the place turned upside down and thousands of pounds stolen.

But with the help of his friends and neighbours, what should have been a terrible time was turned into “the best day ever”.

Mr Easterby said: “I came in on Monday morning and looked through the windows at the back of the cafe and I could see ladders were leaning against the wall and immediately thought oh God, something’s happened.

“I was devastated when I found out they’d discovered where the weekend’s takings had been hidden away – they’d turned the place upside down until they found it. They also took a laptop and a very expensive camera.

“They broke a lot of doors and did a bit of damage down in the club area.

“It was horrible feeling to find lots of muddy footprints on your possessions. It was a sudden and concerted effort.

“But I put a few bits of fluff on Facebook about what had happened and we’ve had offers of help flooding in. My butcher’s just given us a load of mince, friends of mine have come in and started to paint the cafe.

“Musicians have also got in touch to suggest benefit gigs and well-wishers popped their heads round the door to offer some quite disturbing ideas for dealing with the culprits, if they ever found them!

“There’s this wonderful atmosphere, albeit tempered by the fact that I have lost thousands of pounds – but thanks to what the community, Amex staff, the university, police (who were fantastic) and neighbourhood have done, it’s been one of the best days ever.

“Far from being brought down by the experience, we are collectively fired-up, motivated and excited about the future. I feel really lucky (and undeserving) of all the good will, lucky beyond words to have such great staff and fortunate to run a business in this precise part of town, which I still absolutely love.”

Police said they are now appealing for witnesses to anyone who saw the break-in, which happened sometime between 11pm on Sunday (24 April) and 7.30am on Monday (25 April).

PC Ella Graham-Scott said: “If anyone saw something suspicious overnight on Sunday we would very much like to speak with them.